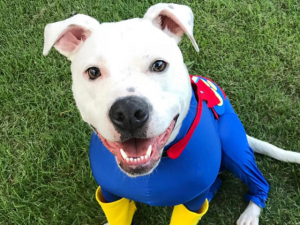 Sometimes, all it takes is a little kindness to put someone at ease, even if that person or thing spreading kindness has imperfections.

That is where “Cole the Deaf Dog” steps in. He is a local celebrity in his hometown of Vineland, New Jersey, and is the ultimate therapy dog for those in need. But before he became the ultimate therapy dog, Cole had a rough start, being passed over multiple times at the South Jersey Regional Animal Shelter until Chris Hannah adopted him in April 2017. Hannah immediately saw potential in Cole as a therapy dog, and he now works alongside the music teacher at Mennies Elementary School in South Jersey.

When the therapy-certified pit bull is not cozying up with students, he can be found offering companionship to those at the Vineland Veterans Memorial Home, where he remains their official mascot.

The dog also provides comfort to those in hospice care.

“The whole message of the Team Cole Project is to try to spread awareness and kindness,” Hannah told the Vineland Daily Journal, noting the project emphasizes that inability is not a disability.

When the coronavirus closed schools and locked down care homes, Team Cole got creative in maintaining its relationships with them by using social media tools such as Facebook, Instagram, and YouTube.

Hannah also drove Cole around the neighborhood of where his students live so he could make a “drive-by” visit. Excited students came prepared with signs welcoming the pooch.

Team Cole plans to regularly schedule these “drive-by” tours as long as school is not in. “We just want to be there for the people who count on us,” Hannah said. “There are a lot of them.”