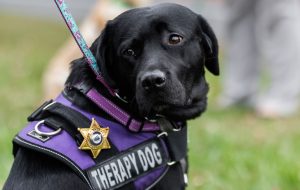 In a case that is likely to have wider repercussions, Pennsylvania’s Supreme Court has agreed to consider whether a prosecution witness in a murder trial should have been allowed to have her “comfort dog” sitting by her side in the courtroom as she testified.

A state Superior Court panel previously ruled that was permissible.

However, on appeal to the state’s highest court, convicted killer Sheron Purnell is contending the dog’s mere presence prejudiced the jury against him.

In agreeing to hear Purnell’s appeal, the Supreme Court justices opted to ponder whether the Superior Court and the Chester County judge who permitted the dog to sit by the witness during her testimony made bad calls.

Also, the justices will consider whether a witness’ need for the presence of any therapy witness must be proven before the creature is allowed in a courtroom.
The ruling that will result from those investigations will affect how therapy or emotional support animals are governed in courtrooms statewide.
Purnell, 26, is serving a 20 ½- to 47-year prison sentence after being convicted of third-degree murder. Police said he shot another man seven times during an argument in Coatesville in October 2016.
The killing was witnessed by an autistic girl, the same prosecution witness who was allowed to bring her comfort dog when prosecutors called her to testify, Senior Judge James Gardner Colins wrote in the Superior Court opinion denying Purnell’s appeal to that court.
Prosecutors sought advance permission from county Judge David F. Bortner for that witness’ appearance with her dog, Colins noted. They proposed that the dog be brought into the courtroom before the jurors came in, would remain inside the box of the witness stand, and would leave the courtroom after the jurors exited.
Bortner overruled objections by Purnell’s lawyer that the mere presence of the dog would cause the jurors to have sympathy for that witness.
When the girl did testify during Purnell’s trial in November 2018, she was overcome by emotion on cross-examination and was unable to answer the defense attorney’s questions. Bortner called a recess in the trial to allow her to compose herself. After she finished testifying, she left the courtroom with her dog after the jury had departed.

The therapy dog issue was one of several matters Purnell appealed and was the only one the Supreme Court agreed to take on.

In the Superior Court opinion, Colins found the Purnell case is the first in which Pennsylvania courts have been asked to address the use of support animals by witnesses during criminal trials. Courts in other states have ruled that the call on whether to permit the animals in the courtroom is up to the judge presiding over the trial, he noted.
“All of the courts which have examined a challenge to the use of a comfort dog in a courtroom have concluded that the dog’s presence is not inherently prejudicial,” Colins wrote.
In any case, he found the dog wouldn’t necessarily create sympathy in all jurors because “some people are afraid of or dislike animals, especially dogs.”
Colins concluded as well that prosecutors don’t have to prove a need for the presence of a support animal provided the creature “alleviates the stress that the witness may experience on the stand and hence helps the witness testify truthfully and completely.”