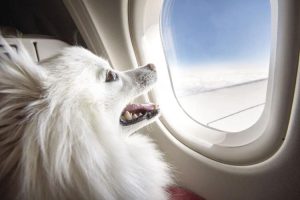 Looking forward to the time when we can travel again (post-Covid), there are some myths and facts about flying a pet by air I would like to cover.

Giving your pet a sedative reduces the animal’s ability to regulate its own body temperature should your pet be exposed to weather extremes, generally while being loaded and unloaded or held over on connecting flights. This can be very dangerous for the pet. A heavily sedated pet can also get its nose pressed into a corner of the kennel reducing its ability to breath. If your dog is accustomed to being in a crate while traveling the flight experience will not be that stressful unless the animal is extremely unsound mentally, in which case you may need to reconsider sending it by air.

Most, if not all airlines have restrictions on specific breeds of dogs and cats. The original reason for breed-bans was for the protection of animals bred to have an extremely short muzzle. These animals experience a much higher mortality rate when flown due to issues associated with heat and breathing issues. According to a Department of Transportation 2015 report, over one half of the dogs which died in flight over a five-year period were short-muzzled breeds.

More recently, “aggressive” breeds have been added to lists of banned breeds due to cases of dogs breaking out of crates while traveling. United Air Lines states on their web-site that these breeds are banned “since they have physical or behavioral traits that put them at a higher risk to be negatively affected by air travel.” This is a very politically correct way of saying they don’t want to deal with the aggressive and/or destructive behavior associated with some high-energy working breeds.

United Airlines lists the following dog and cat breeds (or animals which appear to show a predominance of one of these breeds) as banned. Before booking with any airline go to their website and check the breed ban list. If you are wondering why UAL has the most severe restrictions, a history of a higher than industry standard pet death rate and wide coverage of a 2018 incident in which a flight attendant caused the death of a puppy by ordering the owner to lock it in an overhead bin seems to have caused the airline to take these actions. Industry wide, the death rate for pets traveling in cargo is 0.47 out of every 10,000. (DOT report 2017). A traveling animal is actually at more risk on the ground, awaiting loading, than in the air. All airlines have minimums and maximums at which they cut off transport of live animals. It can be impossible, for instance, to fly a pet into Las Vegas, Phoenix, or Palm Springs in summer. The most important safety precaution you can take for your pet is to book a direct flight, even if it means a bit more time driving to and from the airport. Most airlines require at least two to three hours wait time between flights (to avoid missed flights in case of delays), and that means a long delay for your pet.

Make sure your pet is accustomed to being locked in a travel crate before the flight. You don’t want to find out that your pet freaks out and chews it way out of a plastic crate at 30,000 feet. And yes, it happens. The airline will require that you put absorbent padding (like a blanket) in the bottom of the crate and have both a food and water cup attached to the front cage door. They require that you tape a small bag of the dog’s food to the top of the crate.

Adult dogs should not be fed before a flight, and puppies should be offered about half their usual meal at least two hours before. It’s a good idea to stick a chewy such as a bully stick in with your pet to give them something to do while traveling. Offer adults and puppies a drink, and make sure you give them a good 10 minutes to stretch their legs and empty themselves before you load them at the airport. You can usually find a grassy area near the cargo area for this purpose.

If you are shipping the dog in cargo, you will need a veterinarian’s health certificate; dogs accompanying their owners in the cabin may not need a health certificate, but it is always best to check a few days before with your airline just to be sure. Very small pets can be carried up top if they fit in a specific size crate that can fit under the seat in front of you.

The days of people scamming their pets on board as “emotional support” animals is over. The Department of Transportation, partly due to pressure from more than 80 veterans and disability groups complaining about untrained animals, will revise rules concerning so-called emotional support animals. The revised Air Carrier Access Act will no longer consider the so-called emotional support animal as a service animal. It will define a service animal as “a dog that is individually trained to do work or perform tasks for the benefit of the person with a disability.”

Speaking from experience, I have flown my dogs dozens of times while working, and not once have I had an issue. Air travel remains a quick and safe means for transporting your pet if you plan ahead and use common sense.