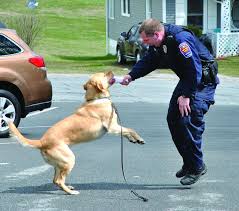 Marion’s most beloved police officer will retire at the year’s end.

While he’s known for his affection for children and love of a good game, this officer also produced results as a crime fighter. He is credited with about 120 arrests in his four years of service to the MPD, as well as helping remove about 17 illegal firearms and a significant amount of drugs from the community.

Best known as Cooper, the 8-year-old yellow Lab has helped with searches in Smyth, Washington and Russell counties and assisted the Chilhowie and Saltville police departments, the county Sheriff’s Office and the Virginia State Police.

In his MPD tenure, the K-9 officer has taken part in more than 200 service deployments, according to a Marion press release.

Cooper has also been an effective community outreach officer, performing demonstrations for schools, churches and other organizations.

According to MPD Chief John Clair, Cooper “provided emotional support for children in our community during their most difficult times. Cooper interacted with children countless times and helped our department to provide a more positive interaction with the youngest of our community, in addition to his record of fighting crime.”

At a recent Marion Town Council meeting, Clair said Cooper is the MPD’s “most popular officer bar none.”

Cooper was first introduced to the Town Council in December 2016 when he broke new ground for the law enforcement agency. The roughly 80-pound Lab and his partner-handler, Sgt. Jeff Horn, are the MPD’s first full-time K-9 team.

In 2016, Cooper and Horn graduated from the Virginia Department of Corrections’ 12-week canine program.

Lt. Andrew Moss had written a grant request seeking to add a canine unit to the department and was awarded $10,000, but the MPD lieutenant knew it wasn’t enough money. However, the pieces began to fall into place.

The Department of Corrections found out about the town’s effort and donated Cooper to the MPD. The state agency also helped with Horn’s education and lodging and meals while he was in training. The Smyth County Sheriff’s Office helped out too by donating a cage for Horn’s vehicle.

At the time, Moss lauded Horn for volunteering for the training and assignment.

Over the years, Horn has forged a friendship with Cooper. The sergeant plans to keep him as a pet when the K-9 retires.

“He’s a great dog, but we all get to the point where we’re better meant for a slower pace,” said Horn. “As much as I’ll miss having him at work, I’ll look forward to seeing him at home at the end of my shift.”

At the meeting, Clair told the Town Council that working as a service dog is demanding. Cooper has developed hip dysplasia, which is causing him pain.

Before he retires, Cooper will continue to engage the community, continuing to do a number of appearances.

Cooper is not aggressive. He passively signals Horn when he has scented an illegal substance. In his first seven months on the job, he detected hydrocodone, marijuana, meth, mushrooms and oxycotin, among others.

When he was brought on, Moss said, even though having a K-9 was new territory for the MPD, Cooper would be “a new crime-fighting tool.” That prediction proved to be true. Clair said his service has been quite successful.

Sometime next year, Clair said the MPD will look at bringing another K-9 officer into the department.