Coronavirus FAQs: Does It Live On Clothes? Can My Dog Infect Me? Any Advice On Wipes? 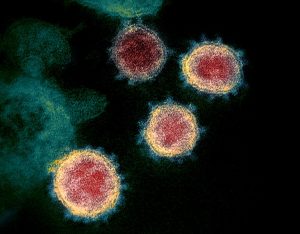 The new coronavirus continues its spread in nearly every nation, bringing illness or death to many thousands of people. In the United States, the number of cases is growing rapidly. Here we ask experts questions from readers and listeners about COVID-19 and how to prevent the spread of the virus.

I know the virus can live on hard surfaces. What about clothing?

It probably can — but you shouldn’t be overly worried. Here’s why.

“The thing that you have to consider, though, is that those tests are done in ideal testing circumstances,” says Rachel Graham, a virologist at the University of North Carolina. “That’s like in some kind of hermetically sealed box where there’s no fluctuation in humidity, there’s no wind, there’s nothing that can contribute toward desiccating the virus. And so desiccation — or drying out the virus — would actually reduce the amount of time it’s actually viable on any kind of surface.”

Plus, porousness is a good thing when it comes to avoiding viral transmission. A surface that is permeable, like a fabric, tends to trap viruses more easily than hard surfaces.

“It’s less at risk of transmitting because the virus gets kind of stuck to the [porous] surface, and so it can’t be easily transferred back off of it,” Graham says. “Porous surfaces also suck the fluid out of it. The viral membrane is a lipid membrane, and so if that becomes dried out, it’s basically done, infectivity-wise.”

If you are concerned that clothing or other fabric items might have picked up the virus, throw the clothing in the washer and dryer. For most situations, says Graham, your detergent will do its job and get rid of any infective particles — or at least sanitize them to the point where they’re not a risk to you.

If you’re taking care of someone who is ill or immunocompromised or if you’re working in a health care setting, you may want to take additional precautions. The Centers for Disease Control and Prevention has recommendations for households with suspected or confirmed cases of the coronavirus, which include wearing gloves when handling dirty laundry from an ill person and using the warmest appropriate water setting when washing clothes or linens to disinfect them.

I like to use wipes to disinfect surfaces in my home — especially surfaces that are frequently touched. But how much surface area can one wipe be used on before it loses its ability to kill the coronavirus?

The first step is to check the label on the wipes you’re using. For instance, the label on a container of Clorox wipes instructs: “Use enough wipes for treated surface to remain visibly wet for 4 minutes. To kill viruses, let stand 15 seconds.”

That time and that visible wetness are important, says Erica Hartmann, an expert in environmental microbiology at Northwestern University’s McCormick School of Engineering.

Regardless of the particular ingredients in the wipes you’re using, “they’re all chemicals that have to react,” she says. “And those chemical reactions aren’t instantaneous — they take a certain amount of time. So what you’re doing when you’re keeping the surface wet is you’re basically allowing time, allowing the chemical reactions to take place.”

So if that Clorox wipe isn’t making the surface visibly wet for 4 minutes, you’re trying to cover too much ground with one wipe.

There’s no exact figure for how much surface area a wipe can handle. But a 2018 study found that one wipe is generally more effective over 1 to 2 square feet than 8 square feet.

And you don’t need a premade wipe to clean surfaces: You can also use a liquid product on a cloth or paper towel. The Centers for Disease Control and Prevention advises using products that contain bleach (sodium hypochlorite) or alcohol (at least 70%) and following the manufacturer’s directions. You can make your own cleaning solution by mixing 4 teaspoons of bleach per quart of water, according to the CDC.

The U.S. Environmental Protection Agency has posted a list of approved products to disinfect against the coronavirus.

Strangers keep petting my dog when we go for a walk. Could my dog transmit the virus on its fur?

Saskia Popescu, an infection prevention epidemiologist at the health care system HonorHealth, says she’s not especially concerned about dog fur transmitting the virus. “I think that I would probably be more worried if somebody was coughing all over the place and went to touch my dog’s harness or something — something inanimate,” she says. “I would put it in the lower-risk category.”

That’s because like fabric, fur is a porous surface — so it isn’t easy for a person to pick up bits of virus from it. “The chances of you getting it from fur and hair is going to be less than getting it from a solid surface,” says Graham, the virologist. Still, she said, she would err on the side of caution and ask people not to pet your dog right now.

Graham says one way to make sure your dog doesn’t get touched by overenthusiastic petters is to avoid letting your dog off leash in a place where it may encounter other people. Rather than going to a dog park, she says, “it might be a better idea to take your dog out in the yard or somewhere you know that there’s not going to be a lot of people.”

And despite the occasional media report of a dog diagnosed with COVID-19, there is no evidence that pets can contract or spread COVID-19. The CDC says it has not received any reports of pets or animals becoming sick with the disease. The American Veterinary Medical Association concurs: “Infectious disease experts and multiple international and domestic human and animal health organizations agree there is no evidence at this point to indicate that pets become ill with COVID-19 or that they spread it to other animals, including people.”

One note: If you are already sick with COVID-19, the association recommends limiting contact with animals “out of an abundance of caution” until more is known about the virus. If you’re not sick with the coronavirus, the group says you can interact with your pet as you normally would — while practicing good hygiene, including washing your hands before and after interacting with your pet.

Can you get COVID-19 more than once?

The short answer: We don’t know yet. It’s not yet clear whether people can be reinfected by this coronavirus or how long immunity might last after infection.

Immunity after recovery from COVID-19 would be a boon in the global fight to rein in the virus. People who have recovered and gained immunity would be especially valuable as health care workers. The spread of the virus would slow if more people had immunity to it. And antibodies from recovered people could help in developing a treatment for the disease.

As NPR’s Nell Greenfieldboyce has reported, scientists are looking for clues about immunity to and reinfection from other coronaviruses.

The severe coronaviruses SARS and MERS did produce antibodies in those who had the virus. In the case of MERS, survivors generated an immune response to the virus that could be detected up to two years later. And the sicker the patient was, the more long lasting their immune response.

But in the case of the four seasonal coronaviruses that are a cause of the common cold, they can sicken people over and over again. After infection with one of these viruses, antibodies are produced — but then the levels slowly decline and people become susceptible again.

“I think there’s a very likely scenario where the virus comes through this year, and everyone gets some level of immunity to it, and if it comes back again, we will be protected from it,” Matt Frieman, a coronavirus researcher at the University of Maryland School of Medicine in Baltimore, told NPR. “Either completely or if you do get reinfected later, a year from now, then you have much less disease.”