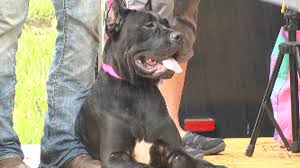 According to the non-profit organization Corsos for Heroes, America loses on average 20 veterans a day to suicide and they’re trying to cut those numbers down by providing service dogs to those in need.

It started with a motorcycle ride and police escort as one veteran, Rafael Ortiz Fonseca, who this year almost lost himself to depression wanted to give back to Corsos for Heroes who gave him a new partner and brighter outlook on life.

“They absolutely work,” said Fonseca. “I was skeptical about it. I heard about it but until I had Bella, my life has changed.”

Corsos may look intimidating but the trait that makes them good service dogs is their loyalty.

“They’re actually Cane Corsos or Italian Mastiffs,” said Ginny Sweet who breeds Corsos and is co-founder of Corsos for Heroes. “It’s the original mastiff, all the other mastiffs came from the Cane Corsos. They’re amazing dogs and they make super service dogs because they never leave you alone.”

“For me, it’s PTSD and anxiety,” said Fonseca. “When my anxiety raises Bella already knows and she comes and calms me down.”

So far Corsos for Heroes has given away seven service dogs for free to veterans including one at this event. They hope to give away upwards of 40 next year to veterans in need.

“We do it to save veterans’ lives because the waiting list for a service dog is 3-6 years and it shouldn’t be one day for our veterans,’ said Sweet. “They should get service dogs immediately when they need one.”

“I’m still here. I bonded with her,” said Fonseca. “It only took two hours a week before the donation and since then we’re inseparable.”

Corsos for Heroes also received a brand new truck wrapped in an advertisement for their brand to try and raise awareness about their goal to diminish veteran suicides.