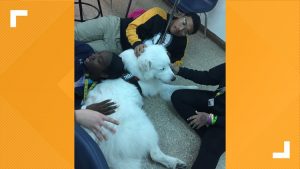 Copperas Cove High School students were introduced to Sam, a rescue dog from the Copperas Cove Animal Control Facility. Sam came just in time to help students calm their nerves and reduce their stress for semester exams, according to the Copperas Cove Independent School District Director of Communications Wendy Sledd.

Sam, a shepherd mix, belongs to ninth grade English teacher James Ortiz. Oritz has taught in Copperas Cove for 25 years at the elementary, junior high and high school level and thought it would be a good idea if Sam come to the school to spend time with the students.

“For as long as I have taught, I have seen many problems and issues our students have faced,” Ortiz said. “If having Sam can alleviate a student’s bad day, prevent a conflict or adolescent drama from turning into a fight, or just give a positive feeling for people, then Sam has done his job. If I had a therapy animal for those students in my past, I know it would have helped some of them, even if only to get through the day. When it comes to our students, the benefits of having a therapy dog on campus surely outweigh any argument against it,” Oritz said.

Because of the dog’s gentle demeanor and sweet disposition, Ortiz thought he could help his students be more successful both in and outside the classroom.

“My next step was to research what I had to do to accomplish this because I knew there had to be training to do what I wanted to with Sam,” Ortiz said. “It took two to four weeks, including training, for Sam and me. A therapy dog has certain requirements to meet for demeanor, behavior, commands, and focus. Though not as intense as a service dog’s training, if a therapy dog doesn’t meet any one of the requirements, the animal will not be certified.”

According to a study published by the National Institutes Health, having four-legged friends in a school setting has proven benefits to both students and staff. They say that having a dog present in the classroom promotes a positive mood and provides significant anti-stress effects on the body.

Ortiz and Sam walk the school halls around 8:25 a.m. to greet students.

“Even students I don’t have in class approach Sam and me and start a conversation about him and their pets. Sam is a great conversation starter,” Ortiz said. ”It’s great way to get to know the students. A few students mentioned that they wanted to see Sam before they took their exams.

On Sam’s first day, he was introduced to the special needs and life skills students, which meant a lot to Ortiz.

“I teared up, seeing their faces light up and how loving they were with Sam,” Ortiz said. “Suffice it to say, Sam was drawn to them and he loved the attention.”

Ortiz said he noticed that students’ attitudes are more positive and they look forward to coming to class knowing Sam is there.

“There are a couple students who have severe anxiety and behavior issues who have responded well to Sam with their demeanor and attitudes changing for the positive when they approach Sam,” Oritz said. “I have not had to send any students to the office, and I have only had Sam at school since the past week.”