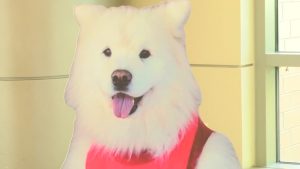 A recognizable figure in the community is causing joy and de-stressing people at IU Health Arnett.

It’s Teddy! Well a cardboard cut out of Teddy.

He said he came up with the idea after seeing a hospital on the west coast do it.

Since therapy dog’s aren’t allowed at the hospital just yet, GLGraphix in Lafayette made this almost four foot tall tiny Teddy.

He was delivered last week and is planning on going room to room to surprise patients.

Feuer and the volunteer program coordinator at IU Health said they can’t wait to have actual Teddy back.

“Teddy is used to working 30-35 hours a week and right now he is bored to tears,” said Feuer. “He just lays on the living room and lays there all day.

“I know it will help the staff to just decompress and have something to smile about so when he came to me with the idea I’m like alright this looks like something we can do,” said Cheryl Suter. “We can sanitize it. We can clean it. ”

Suter is the Manager of Volunteer Services at Indiana University Health Arnett.

There is no timeline when therapy dogs will be allowed in the hospitals again.

For now, hospital staff and patients said he is a paw-some replacement.