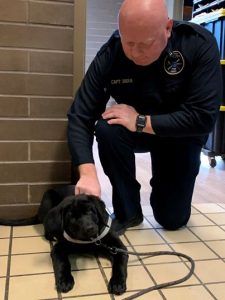 Delaware County’s newest employee is taking over at the courthouse.

“I’m usually going to get my daily puppy fix and visit Frankie,” Juvenile Court Judge David Hejmanowski said. You may have seen the playful pup around town. County officials say he is working hard and learning fast. In a few months “Franklin” will be the county’s first ever certified therapy dog. “It’s amazing the things he can already do,” Probation officer and handler Gia Degirolamo said. “We were working with the prosecutor’s office and the victim he was with started getting upset. He just reached over and put his paw on her leg, instinctively.”

Franklin will be helping victims of terrible crimes get through some of the most distressing times.

“If there is a dog there, someone can just talk to the dog,” Degirolamo said. “Or they can just pet the dog and we know that increases their dopamine.”

He will mostly be working in juvenile court, with children who may have been victims of horrible neglect and abuse. Judge Hejmanowski said, they often work with very young children who are having to explain traumatic situations inside of the courtroom.

“If you look around a courtroom, you can see how intimidating that would be. Especially when a child is expected to tell their story to an adult that they’ve never met before,” Hejmanowski said. “Those experiences can be very traumatic for kids.”

They hope Franklin can be a friendly face and a soft hug for child and adult victims through their most trying times.

“We’ve also had some pretty tragic things happen in our schools,” Degirolamo said. “So he can support them when they need grief counseling.” He will graduate from his therapy dog training this spring.