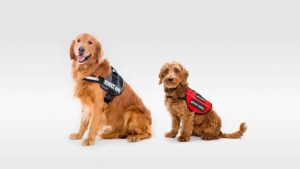 You’ve probably encountered an emotional support animal or service animal before and if you don’t know the difference between the two, you are not alone. While there can be a tendency to use the names “emotional support animal” and “service animal” interchangeably, the two serve very different purposes with specific legal differences. Check out what happens to service dogs when they retire.

What are service animals?

Service animals are “dogs that are individually trained to do work or perform tasks for people with disabilities,” according to the Americans with Disabilities Act (ADA). Service animals have a mighty list of responsibilities that can range from guiding people who are deaf to alerting and protecting somebody from seizures. They can also be tasked to remind someone with a mental illness to take prescribed medications, or to calm someone with post-traumatic stress disorder (PTSD) during an anxiety attack.

“Service animals are used to make their owner’s lives more normal and easier,” according to Sara Ochoa, a small animal and exotic veterinarian in Texas and veterinary consultant for dog lab.com. While service animals require training, they do not need to receive professional training, according to Ochoa. They simply need to be trained to do the tasks they are assigned to do. If you’re skeptical about just how helpful service animals can be, check out these service dogs who saved the life of veterans.

What are emotional support animals?

“Emotional support animals are different than service animals,” Ochoa says. “They are trained to follow basic commands but are not trained for a specific task. They are to provide emotional support and help keep their owners calm in stressful situations.”

What are the legal differences?

Service animals have access to a lot more places than emotional support animals, according to the ADA. “State and local governments, businesses, and nonprofit organizations that serve the public generally must allow service animals to accompany people with disabilities in all areas of the facility where the public is allowed to go,” the ADA states.

Therapy dogs, on the other hand, visit hospitals, nursing homes, schools, airports and other facilities that they are invited to and that are covered by their therapy dog insurance, according to Nicole Ellis, certified professional dog trainer with Rover. As they are not covered by the ADA, they are not allowed in public places such as restaurants and stores.