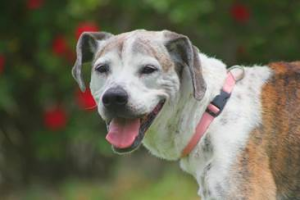 It’s a solution to a decades-old problem: the fight between dangerous dogs and mail carriers.

Now the post office is hoping to make a big difference, with a small effort.

A new program is trying to avoid a sticky situation, while also raising awareness.

You may have noticed something new in-front of your house: little stickers, for those with dogs at home.

Bryan Hamilton has been a postal carrier for 14 years. But for some houses in Owensboro on Wednesday, he’s bringing something new with the mail.

“The name of the initiative is PAWS,” explained Alan Lewis, Kentuckiana Safety Manager for the United States Postal Service. “A labeling system, if you will, a sticker system. It just indicates there’s a dog there.”

“The house before where a dog is, with a yellow sticker. To let a carrier know the next house they’re coming to that there is a dog there,” Hamilton added.

“Orange sticker. Indicating there is a dog present inside,” Lewis continued.

Hamilton is sharing with those on his route what they’re for. The USPS has postcards with the info–but he also does it in person.

“It doesn’t mean the dog’s vicious. I’ve never had any trouble with your dogs,” he said to pet owner Edward Schifflet. “It’s not that. Like a carrier that’s not familiar, when those dogs hit the door. it startles them. it scares them. it just gives them a head up that there’s a dog here.”

“‘Cause there’s a lot of dogs that run the neighborhood,” Schifflet said. “So we don’t know what they’re like. They won’t come to you. Some of them won’t, some of them do. Some of them are to the point where they’re big enough that they’re going to scare people. I think that’s a great idea.”

“During the COVID-19 pandemic especially, people are home. Kids are home. They’re spending more time out in the yard with this nicer weather. We are seeing more dogs out in yards. It is very common, meaning more of the possibility of a negative encounter,” Hamilton explained.

So, the stickers, for anyone who drops by–

“It’s actually not just for our carriers. It’s for the police department, fire department, pizza man. Peace of mind, if you will.” Lewis listed.

–a heads up to stay safe.

The stickers will appear across counties around the Ohio River in both Kentucky and Indiana.