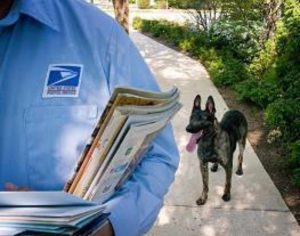 “I haven’t been bite but I’ve been attacked. I’ve had a shirt ripped, a satchel that’s torn. This is a newer one. And it was just the one time currently, I have had two or three dogs come out of the house but then don’t actually come at me they just bark,” said Chris Sabrowski, postal carrier.

Sabrowski says to help keep postal carriers safe, make sure to keep your gates closed and dogs on leashes if outside.