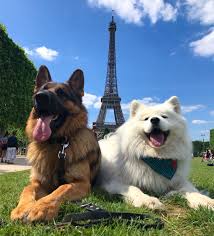 It’s normal for pet parents to be obsessed with their pet babies. Right from choosing the perfect leash to the apt food for their furball, a pet parent goes the extra mile to ensure their pup’s happiness! A lot of pet parents also want the skills extraordinaire of their pooches to be used for the right profession!

“I think it’s very important to keep your pet baby physically and mentally stimulated. This helps in their overall happiness and channelises their energy positively. There are so many professions a pup can pursue,” says Arnab Haldar, a Delhi-based pet parent and pet foster dad. Many pets are social media stars, and have verified Instagram handles with millions of followers. Haldar adds, “I’m training my pet to become one such Instagram star. I’ve been teaching him simple and basic tricks like shaking hands, rolling over, and even the most trending trick on social media, of fitting his nose into my curled up fingers!” Those pet parents who want to give back to the society are also choosing to train their dogs become therapy masters. There are NGOs that provide such training, and even certification for the same. “We have all types of dogs who have undergone training, and now they are well experienced therapy dogs,” shares Minal Kavishwar, from the NGO Animal Angels Therapy Foundation. Elucidating with an example, she adds, “One such dog is Lucky, an indie dog who was rescued from the streets and nurtured by the owners, and then evaluated and trained to be a therapy dog. Lucky works with children who have multiple disabilities, as part of our Animal Therapy program, at Bal Kalyan Sanstha in Pune. Another example is dog Uno, who was abandoned and rehomed twice when just four-month-old; before being adopted by one of our Mumbai-based team members. Now, at the age of three, he is an experienced therapy dog, and works with people with autism.” Some pet parents have even groomed their pups to become show dogs. Niti Kaur, a Delhi-based pet parent, says, “My Shih Tzu has a full coat and I brush it three times a day to maintain it. She is also on a special diet, and has a timetable to do various exercises such as running through hoops during the day. When it’s hot, she does it indoors. We have together participated in various dog shows that are conducted yearly.” Another noble profession that pet parents can choose for their buddies is ‘emotional care giver’ for scared animals. “Puppies can also be trained to give emotional comfort and support to other dogs who have been rescued or are being fostered,” says Shweta Gupta, a Gurugram-based animal trainer. Gupta adds, “One of my clients rescues animals and fosters them. She has a Golden Retriever who comforts the newly rescued pets, and makes them feel calmer with his presence. He has been trained to be patient and happy.” For city folks who love to travel and vlog, a puppy can totally brighten up your videos by being your partner in travel. “I’m always on the move and really want my puppy to be able to accompany me wherever I go. I’ve been watching how some pet parents take their pets along with them wherever they go, and document their journeys throughout. I’m planning to do that too as soon as the pandemic ends! I’ll create my dog’s own YouTube channel,” says Yash Babbar, a Gurugram resident.