Dog Of The Year 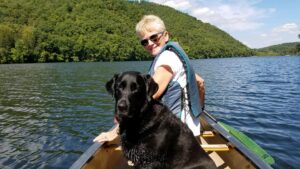 The two Maine service dogs have won their categories in the 2020 American Humane Hero Dog Awards and will appear on the Hallmark Channel this fall, competing for the grand title of “American Hero Dog.”

Aura, a 7-year-old Labrador retriever/golden retriever mix from Brunswick, serves as a hearing dog for Gretchen Evans, an Army veteran who lost her hearing after being struck by a rocket blast in Afghanistan more than a decade ago.

Among other things, Aura alerts Evans to doorbells, text messages, sirens and people approaching from behind — a service that has allowed Evans to regain her active lifestyle.

After winning more online votes than her competitors, Aura was recently named 2020 Guide/Hearing Dog of the Year.

Dolly, a 3-year-old Lab from Naples, is trained to alert when owner Amy Sherwood is having cardiac problems.

Because Sherwood uses a wheelchair, Dolly also picks up or retrieves objects for her — including her wheelchair, which has a leash attached to it so Dolly can grab and pull.

Dolly was named 2020 Service Dog of the Year.

Aura and Dolly will compete with five others for the top dog title. Maine is the only state with two finalists.

The American Humane Hero Dog Awards is sponsored by the Lois Pope LIFE Foundation and will be broadcast nationwide as a two-hour special on Hallmark Channel this fall. The dog with the most online votes will take the title of American Hero Dog.

Votes can be cast once a day through Sept. 10 at Hero Dog Awards.org.

All seven dogs will appear on the two-hour special. The top dog will get a special tribute.

Evans would love for Aura to be that dog.

“She changed my life, gave me back my independence after my injuries,” Evans said. “I just wanted to honor her service.”