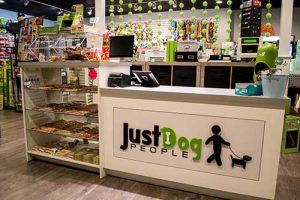 Over a rousing game of table tennis, cheered on by a pack of four shelties, heads bobbing back and forth with the ball, Jason and Katie Ast reached a pivotal decision. They would open their new pet retail business as a just-for-dogs endeavor. The couple wanted to stand apart from the competition by providing a stellar customer experience with focused knowledge and a progressive offering of product and services.

This was no spur-of-the-moment undertaking; a year of due diligence included plenty of research.

“We created our business on paper first, which was more than just a simple business plan,” says Jason Ast, co-owner with wife Katie of Just Dog People in Garner, N.C. “It detailed how we would operate, how we would manage, how we would train our staff. We wanted to forge our own way of doing business.”

However, throughout the process, the couple grappled with the range of possible services and offerings. As the plan evolved, a sticking point persisted—whether to cater to multiple species or to stand by their canine passion. No strangers to cutting-edge concepts, the Asts felt a strong pull to open an establishment focused on and catering to area dog lovers explicitly.

Lobbing a ping-pong ball over the net, Katie’s sage observation sealed the deal, “We are just crazy dog people.”

Jason and Katie brought unique skills and expertise to their vision. Neither were strangers to taking a leap of faith: For 12 years, Katie had owned and operated the first boarding and day care facility in the town of Garner, a rapidly growing area just outside of Raleigh, N.C.

“Katie was ahead of the curve,” Ast says. “Today, there are about eight such places within 20 miles of us. We had a large, local following because of her business.”

Jason, a self-described serial entrepreneur, had operated multiple businesses over the years but longed to shed his tie and enjoy life.

The duo’s goal was realized in 2016, when the doors to Just Dog People opened in 3,800 square feet of space, sited at the busy intersection of Garner’s two main highways.

The Asts’ sheltie family has since grown to five as Zoe, Olive, Bea and Veda recently welcomed puppy Wren. While they originally served as shop dogs and greeters, store traffic has increased and the pups now take turns going to work with their owners, hanging out in the store office.

In the beginning, the concept of a dog-only store was met with resistance from vendors, who advised that offering products for the feline set was essential. The couple listened, and products for cats were initially added to the mix, only to be eliminated after a year or so.

“Obviously, dogs-only was a bit of a risk, but we realized that is who we are. I can’t talk to people about cats, and it’s difficult enough to train staff on one species, let alone two or more. It’s easy to find dog people,” Ast says. “So, we are highly targeted to one species.”

“One of the things we hated about the larger pet stores were the aisles, so we wanted to use our space in a more interesting way,” he says. “We use tables, set up so customers meander around, viewing all four angles. Because our focus is dogs, we are able to bring in products that people don’t even know exist.”

Staff members are trained to step in and offer explanations or assistance should they notice customers’ confusion when observing an unusual item.

“Our store is made for shopping, and for fun, so there are interactive items on each table,” Ast says.

For instance, when St. Patrick’s Day rolled around, a cookie-filled pot of gold at the end of a rainbow enticed shoppers to try their luck with a cookie purchase, some of which revealed $5 or $10 gift certificates.

The entire store gets spooky during JDP’s Howl-O-Ween soiree, where pets quaff pumpkin spice lattes, dig for bones in a graveyard concocted of kiddy pools and mulch, and parade in their costumed best.

“Howl-O-Ween is one of our favorites,” Ast says. “Katie started it back at the kennel with a parade of day care dogs, so it goes back probably 16 years. It’s just so much fun.

“We always try to offer the unexpected around every turn, that is the most unique thing about us,” he says. “We get to see people every day that are just happy to be with their dog.”

To that aim, JDP is, first and foremost, committed to presenting customers with an exceptional experience, and Ast notes that staff members, or JDP ambassadors, are vital to that outcome. For this reason, the company looks for candidates with strong communication skills, confidence and a mindset of hospitality.

“Because service is No. 1, we look for people who understand the humility of serving others,” he says. “That takes confidence.”

This self-assurance is bolstered by assigning problem-solving autonomy to staffers from day one.

“If met with a customer issue or complaint, no matter the problem, we don’t want our staff members running around trying to find someone to make a decision for them,” Ast says. “We want our people to make things right, on the spot, and they will never get in trouble for a mistake. When you empower people, especially young people, they respect that and want to keep that trust.”

For this reason, employee training is extensive and supportive.

“Everyone starts as a rookie, with 30 work days to accomplish a set of classes, tasks and proficiencies,” Ast says. “At that point, they reach ‘First Paw,’ which is a level of training. Within this time, they learn to open and close the store, cash out, do inventory, check things in and do returns. It takes a lot of effort and time, but the whole team helps out.”

“We try to break it all down to the ridiculous: how to look at food and how to get through general conversations,” Ast says. “Should they become stumped, they can call on us.”

When associates master a new level, or “Paw,” a bonus and an hourly pay increase is awarded. In addition, with no managerial positions, a roundtable concept finds senior staffers helping out newcomers.

“It’s kind of a kick-back program where those that came before are responsible for teaching the rookies, who, in turn, will teach the next rookies,” he adds. “It builds these unbelievable employees.

“We have three rules: One is to give your teammates a better work day than they would expect; two is to give the customer a better experience than they expect; and three is to always make it right for the customer,” Ast says. “That’s the bar that we have set, and we don’t accept anything else.”

Bakery treats are also in the mix.

“We are amazed at how many treats we sell,” he says. “We have a nice cookie display built into our cash wrap. We do all the holidays, special events and birthdays.”

While raw is the food of choice, customer preference is always respected.

“We don’t pooh-pooh anybody’s feeding plan,” he says. “We feed raw, our employees feed raw, but we don’t ‘sell’ raw; we allow people to reveal a need, or we wait for them to come and ask us about it. We have big, beautiful freezers in the middle of our store for everyone to see. Our raw sales are up in huge amounts, but we are careful how we present it to the public.”

One-on-one food consultations are available, with behavior and eating habits taken into consideration when finding the right food to meet the nutritional needs of each individual dog.

“I probably talk to three or four people randomly each day, on top of scheduled appointments,” Ast says. “We also do intolerance testing, which is closely tied to food. I just love nutrition—the before and after, how dogs behave when we finally find the right diet. So I spend the majority of my days talking to people about food and nutrition.”

“Typically, allergies and intolerances are two different things,” he says. “If a consumer sees signs of what they think is an allergy, there is a very high likelihood it is an intolerance. We use this tool to find out.”

As a result of this analysis, and in partnership with 5Strands Affordable Testing in Georgia, pet owners are provided paths that assist in monitoring their dog’s nutritional reboot, bringing them closer to clearing up these issues.

Education also includes seminars, such as Introduction to Raw Feeding, which has replaced the Food 101 seminar for customers. These workshops are presented to customers and private groups.

“I have found that talking openly and honestly to the general consumer about dog food often leaves them feeling like bad pet parents,” Ast says. “I’ve tried to tailor this discussion, but there’s just not a way to leave people feeling good, so we have replaced Food 101 with Intro to Raw, because these people already know there is a better way.”