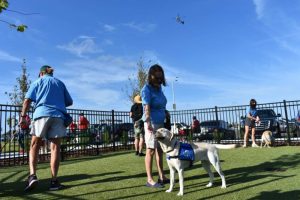 St. Petersburg is widely recognized as a dog-friendly city, and St. Pete-Clearwater International Airport is making sure its four-legged visitors and their humans feel welcome by rolling out the artificial turf carpet.

With the completion of the airport’s parking and roadway project – part of a series of multi-million dollar improvements at the airport over the past year – PIE has opened a brand-new “bark park” where guests and their dogs can frolic in a fenced area with anti-microbial turf, benches and hydration stations. And in case you left yours at home, they’ve got dog waste bags available, too.

While the bark parks are new to the airport, its relationship with the canine community is not. About a year and a half ago, the airport began hosting dogs as part of its PIE PUPS (Pets Uplifting People) program, according to airport spokesperson Michele Routh. Organized by Project PUP, a certified therapy dog program, PIE PUPS spend time with passengers before their flights, which can help ease the stress and anxiety some people experience during air travel. All the dogs in the program have been therapy dogs for at least two years and also visit other sites including schools and hospitals.

PIE PUPS aren’t the only dogs that can be found at the airport. PIE has worked with the Southeastern Guide Dog Association for a number of years to help families who are training guide dogs. The dogs – and their humans – are periodically invited to the airport to take tours and go through TSA screening. Allegiant flight crews then invite the dogs on board so they can get the experience of being on a plane, something they could end up doing with their owners once they start their official guide dog careers.

Southeastern Guide Dogs worked with airport staff on the bark park project, which Suzy Wilburn, director of admissions and alumni support for the organization called a “wonderful experience” that will help improve accommodations for those traveling with a service dog.

“Their focus on accessibility, safety and attention to detail is top-notch and should be recognized,” she said of the airport.

In non-dog related news, September passenger traffic at the airport is down 37 percent from the same time last year, marking PIE’s lowest monthly decrease since the pandemic began. Overall, 2020 year-to-date passenger loads are down 35 percent. At the August ribbon cutting of an outpost of the popular Mazarro’s Italian Market located in the area outside gates 7 through 11, airport director Tom Jewsbury said PIE has been able to retain 53 out of its 56 nonstop destinations.