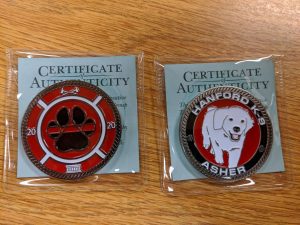 This summer, HFD partnered with Visalia-based California Service Dog Academy, to train puppies to help firefighters in the department deal with stress and their mental health.

The academy donated two puppies, named Asher and Tiller, to the department as a way to not only alleviate the mental stress of the firefighters, but to also to bring joy to the community.

Martinez, Asher’s handler, said when he and firefighter Connor Kurtz, Tiller’s handler, came up with the idea for the program they decided to fund it through fundraisers in order to keep the financial burden away from the department and the city.

Martinez said California Service Dog Academy has been great with helping with the dogs’ needs, but he thought it would be good to have some extra funds for things that may pop up, like vet bills or other care the puppies may need.

That’s where the idea for the challenge coins came in.

Martinez designed the coins with a paw and the HFD logo on one side and a drawing of Asher on the other side.

He ordered 100 coins and in less than 24 hours has already sold more than half of them to people as far away as Boston and New York.

For anyone wishing to purchase the $20 coin, Martinez said you can message him on social media through the HFD Facebook page or Asher’s Instagram page at hfd_k9_asher and he will mail the coin. He said payments can be made through PayPal or Cash App and the money will go directly into an account for the dogs.

Martinez will also leave some coins at HFD Fire Station 1, located at 350 W. Grangeville Blvd., for those who would like to pick them up directly.

Asher and Tiller have been at their respective fire stations with their handlers for about seven weeks now and Martinez said they are doing well and acclimating to the stations. He said they are also very sweet and great with the public.

Fortunately, Martinez said there hasn’t been a serious incident at the department that has taken a toll on firefighters’ mental health and need for the puppies’ services. Nonetheless, he said the other firefighters in the department have welcomed the puppies and he’s noticed the benefits of the program.