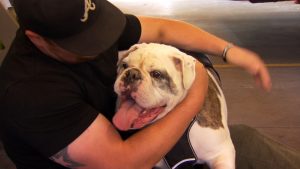 For James Verdugo, the bond he shared with his dog Sampson goes beyond a man and his best friend.

“He might just be an animal to a lot of people but to me he’s everything,” says Verdugo.

For 10 years, the English bulldog has been by his side.

The veteran says he suffers from PTSD after serving for several years in the Army and taking part in operation Iraqi Freedom. Sampson serves as his emotional support.

“I wouldn’t even want to imagine life without Sampson and without having the support of him with everything I’ve been through.”

Even after losing his home on the 4th of July weekend, Verdugo says he’s filled with gratitude after firefighters pulled his pup to safety.

As flames tore through the southeast Fresno home, it was firefighter specialist Abel Steele that found Sampson hiding behind a closet door.

“Some of the ceiling fell and it scared him back to his corner,” recalls Steele.

Aiding in a search of the home was firefighter Rob Lee, who said he was inspired to join the department when firefighters rescued his dog from a fire that destroyed his home, 21 years to the day before this fire.

“To see him breathing and happy to be back with his owner, that’s what really brings it full circle,” says Lee.

Even with the military discount the vet offered, Sampson’s hospital bill surpassed $8,000.

The community rallied behind him and his Go Fund Me page is more than halfway to meeting its goal.

“This career has a lot of great moments, a lot of bad moments, we see all of it, so to see this, the positivity it’s pretty cool,” says Lee.

Even though Sampson is in good spirits, the vet says he’ll likely have long-term effects from the smoke inhalation.