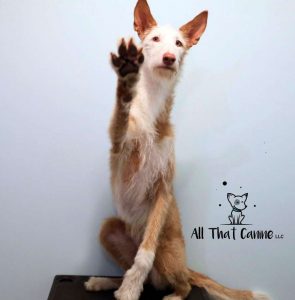 A new dog training center will celebrate its grand opening with a ribbon-cutting ceremony on Saturday.

All That Canine, at 849 Main St., will kick off the day with the ribbon cutting at 11 a.m. Saturday before a day of activities hosted by the businesses’ co-owners and trainers, Linda Mazzeo and Erica Kasper.

There will be an agility set-up for people stopping by with their dogs, music, hot dogs and selfies with the dogs, Mazzeo said. They’ll officially open their doors for dog training on Monday, she said, adding that they’re expected to have a few puppies coming in for a sort of “puppy kindergarten” school program, learning things like how to sit, get down, leave items alone and more.

“And it’s all 100 percent positive reinforcement training,” said Mazzeo, who has lived in Monroe for about 28 years. “We’re very gentle on the dogs. We’re not tough cookies here. It’s a game-based training that we use — so we make the dogs have fun, because if dogs want to do it, they come back and they’re eager to do it and they want to learn.”

Residents of Monroe could see some pups out and about, too — trainers are going to bring them to dog-friendly places to train, Mazzeo said.
“A lot of people like to bring their dogs places, we’ll train that,” she said. “So we would bring them there, we would teach them how to act around other people, shopping carts so they’re not fearful in the parking lot with the cars and all that stuff, so we expose them to all life skills, if you will, if they’re out and about in the parks, wherever.”
Some of the business’ offerings include day school, classes and private training, online training classes and more. Day school is $75 for one day, $335 for five days and $630 for 10 days, according to its website, and an online training class is $150.

Mazzeo and Kasper, who have worked with or trained dogs for at least 20 years, bring extensive experience to the business. They worked for a service dog organization for “many years,” Mazzeo said, and one of her primary goals is to train therapy and service dogs at the new center.

“The hope for the future is that we grow in Monroe and we train a lot of dogs and make a lot of people happy, make a lot of families happy with their dogs,” Mazzeo said.