Dog Who Needs Patience Gets Adopted 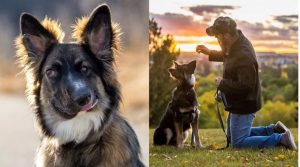 One sweet rescue dog is enjoying his fairy-tail ending in a fur-ever home after receiving “hundreds” of adoption requests.

The spirited German Shepherd Border Collie was left with a “wonky” face and partial blindness after being attacked after birth and was returned to the shelter when his initial owners couldn’t handle his “hyper” personality.

Brodie the pup is officially living his best life after being adopted by Amanda Richter and Brad Ames. The couple said it was “love at first sight” when they saw photos of the “wonky”-faced dog online, and rescued him from Old MacDonald Kennels in Alberta, Canada in September last year.

Brave Brodie has grown up with severe cranial and facial injuries after being attacked by his mother at just 13 days old, news agency South West News Service (SWNS) reports. After the incident, part of the dog’s jaw fused together as he grew, leaving one side of his face “slanted” with partial blindness in one eye.

The adorable border collie spent just five months with his initial adoptees, and his first owners returned him because he had “too hyper” of a disposition.

Richter, meanwhile, said she was instantly “drawn” to Brodie and his resilience through his difficult start in life.

“I looked at his photos every day and even cried a few times. We felt drawn to him for some reason,” the 30-year-old woman said. “We met him, took him for a walk and hung out with him for a few hours and ended up bringing him home the same day because the rescue really felt we were a great fit.

“He’s definitely hyper but he is so intelligent,” she explained. “His brain is perfectly fine and he learns tricks within 10 minutes usually which tells me he is a smart boy.”

“He just needed patience and someone to be consistent. He gets better every week.”

As Brodie grows up, Richter and Ames, 23, have big dreams for their precious pooch. The proud owners hope to train him as a therapy dog for people with special needs while raising awareness for other disabled dogs.

Though other medical complications may arise as he grows, Richter said she’s simply thankful her dog is “healthy and happy” right now.

“It’s actually funny because when we go to the dog park everyone notices how he is the happiest pup there and just wants to play and run,” she said. “Dogs are resilient and he has no idea he looks different so he enjoys his life just the same as any other pup.”