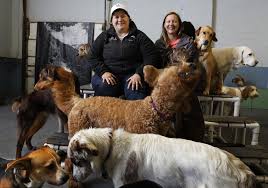 It might seem like a trivial thing for some, but a North Side day care center for dogs has been a huge help for some medical professionals and essential workers by remaining open during the pandemic. Pathways to Independence of Central Ohio has helped the workers to stay afloat during a tough time.

Parents count on Maryellen Anderson to help them find the right doctors or the best treatments or maybe a wheelchair to help their children with serious illnesses.

It’s critical that Anderson have peace and quiet at home while helping people navigate the complex medical world.

The registered nurse/case manager loves her dog, June, but she counts on a day care center for dogs in North Columbus the way her families count on her.

“Having June out of the house is a big deal,” said Anderson, 28, who goes by Mea and has been working from home since March 12. “June likes to talk and play. I can do my job because Pathways continued doing theirs in a tough time.”

The majority of the 35 dogs in the sprawling kennel at Pathways to Independence of Central Ohio belong to health care workers or essential employees in other fields.

Pathways is both a nonprofit organization that employs 20 young adults with disabilities and a for-profit dog day care center that helps fund the operation.

It was started in 2015 by Stephanie Sanzo, 36, and Megan Ramage, 57, both of whom are former special-education teachers in Worthington. They saw how their students responded to a service dog named Karma, who greets folks at the door, and decided they could give disabled adults more independence and confidence by starting the nonprofit.

Pathways usually cares for about 75 dogs, but the pandemic has cut its business by more than half. It would have been easy to close the 7,000-square-foot complex, but the owners didn’t want to lay off their employees or let down the people counting on them to care for their dogs. The owners have barely paid themselves the past two months, but they continue to pay the disabled adults who play with, feed, bathe and care for all the dogs between 7 a.m. and 7 p.m. Monday through Friday.

The owners are grateful to their landlord for giving them a break on rent, and to all the people who have continued supporting them.

“So humbling to have people trying to keep us afloat even though so many are struggling themselves,” Sanzo said. “The dog owners are appreciative of us, and vice versa. We do have some exhausted dog owners trying to do their jobs who just hand us the leash and say ‘Please just take her or him.’”

Caitlin Beebe and her husband, Josh, who are medical professionals at Ohio State University’s Wexner Medical Center, are exhausted when they finish their shifts.

They also had their first child in January, but at times it’s harder to deal with the energy of Moose, a 1-year-old German shepherd-beagle mix.

It comforts Caitlin to know that Moose, a rescue dog, is burning off some of his vigor at Pathways and learning to interact with other dogs.

“When we come home from a long day, it’s a huge help,” said Caitlin, 30, who helps patients recover from heart and lung surgeries or conditions. “Pathways helps Moose and us.”