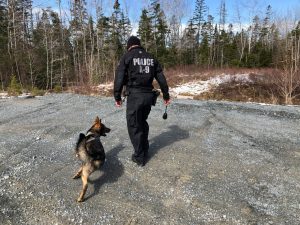 The pair had been called Monday to an area near Highway 357 in Musquodoboit Harbour, N.S., to join the search for a three-year-old girl who was missing after wandering away from home and into the woods.

“In my mind it was so thick and so hard to navigate through that I was ready to pretty much determine that no human would go through there,” Berube said Wednesday.

Police had issued a public appeal that afternoon for any information that would help locate the little girl, bringing fresh distress to a province still reeling from the mass shooting little more than a week earlier. Halifax Regional Fire and Emergency even sent a drone team to the area.

But thanks to a keen canine and his Halifax Regional Police handler, the search would end happily.

When Berube first got the call on Monday, he and Jynx were training with other canine units. After arriving on scene, the other first responders out scouring the woods were called back, as dogs often work better with fewer people around.

“If there’s a lot of human scent in there, it gets harder for us to find the actual person we’re looking for,” Berube said.

In his training, Berube had learned that young children who are lost often go downhill. But he said the girl’s mother had told another officer that the child was a climber and was most likely heading uphill.

“So I went with mom’s gut. I have children of my own and I know my children best, and I figured mom knows her daughter best as well,” Berube said.

Once he had gathered what information he could, Berube and Jynx headed into the woods.

“You don’t really know where to start, it’s a needle in a haystack. Sometimes you’ll have certain indicators, footprints in snow if you’re lucky,” he said. “In this case, we had no starting point.”

They started up a hill, accompanied by an RCMP officer. But any time Jynx picked up a scent, it was heading back to the girl’s house, leading Berube to believe the dog was smelling previous officers in the woods.

Battling through branches and traipsing through mud, the officer decided to clear the hilltop.

That’s when Jynx started to track another scent. Berube called to the RCMP officer to hurry. Then he heard a faint “hello.”

“I thrashed harder and my dog led me to where she was — and here she was in the middle of absolutely nowhere, a whole bunch of pine brush around her and she was just standing there,” Berube said.

“The first thing she said was, ‘Doggy.’ I just hugged her.”

The girl was wet and shivering. Berube took off his jacket and wrapped it around her.

“Her curly hair was starting to stretch out because of the weight of the water in there. She had two mismatched boots and she was just standing there,” he said. “Not crying, she didn’t seem fearful, she was asking for daddy and mommy.”

An RCMP officer carried the young girl out of the woods and back to her parents.

“I can’t imagine one of my children not being home for dinner, not home at night,” Berube said. “I wasn’t going to let this one slide.”

As for Jynx, he was given a treat for doing his job well.

“Just another day at work for him,” Berube said.