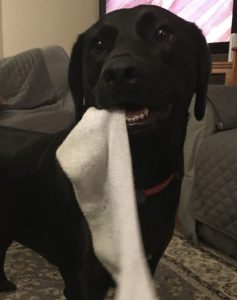 My assistant had just gone home at the end of a busy day when I got an urgent call about Ricky, an almost-2-year-old Cavalier King Charles Spaniel. Ricky is a service dog who had been out for a walk with his owners when they stopped to talk with friends. A moment later, his mom glanced down, and there was Ricky, happily gnawing on a block of something that looked suspiciously like rat poison. You know, those big waxy blocks that come in various colors, shapes, and sizes. His owner immediately pulled it away, scooped up all the bait on the ground, then phoned the veterinarian on emergency call that evening. Me.

Here was our dilemma. Ricky’s family had not put out any kind of rodenticide. No one knew where it had come from. Perhaps it had fallen off a garbage truck that had been there earlier that day? One family member suggested the blocks looked like rat poison he had seen before that contained bromethalin, but the reality is that we can’t definitively identify the active ingredient in a rodenticide block simply based on appearance.

So we were faced with a small dog who had consumed an unknown quantity of an unknown rodenticide. “Bring him right down so I can induce vomiting,” I advised, texting my assistant to come back. “He looks fine,” his mom said. “These poisons can take a while to cause symptoms,” I replied. “By the time a dog is visibly sick, it’s usually too late.”

When Ricky arrived, I administered medication to make him vomit. He obliged quickly. Three big piles including the bread I had instructed them to feed prior to heading over. Doing due diligence, I sifted through the yuck, but found no evidence of material matching the bait the owners had brought along. Had he just not swallowed any to begin with? Or was it just not coming back up and out? What if he still had rat poison in his tummy?

There are three major types of rodenticide we had to consider. Anticoagulants, bromethalin, and cholecalciferol. In the old days, most rodenticides sold in the U.S. were anticoagulants. These interfere with normal blood clotting, leading to fatal hemorrhage. Treatment is simple, four weeks of oral Vitamin K. But a few years back, regulations changed, and the sale of anticoagulant rodenticides was limited to commercial exterminators. Nowadays, the stuff routinely available in hardware stores to homeowners contains bromethalin — a nasty neurotoxin for which there is no antidote. If Ricky had eaten bromethalin, all we could do, after making him barf, was to dose him with oral activated charcoal to minimize any further absorption of the toxin, and wait and see if he developed clinical symptoms. Signs vary depending on the dose. With high doses, dogs exhibit hyperexcitability, followed by seizures and death. With low doses, signs include depression, loss of appetite, vomiting, tremors, followed by paralysis and death. Treatment consists of supportive care but is often unsuccessful.

The third possibility was cholecalciferol rodenticide, basically an overdose of Vitamin D leading to toxic levels of calcium in the blood. Signs can include vomiting, depression, lethargy, bloody diarrhea, seizures, kidney failure, cardiac arrhythmias, and death. When this type of rodenticide was first marketed in the 1980s, it was touted to be relatively safe to use around dogs. We soon learned otherwise. As little as half an ounce can be life-threatening to a fifty-pound dog … and Ricky only weighed 17 pounds.

Toxicologists have a saying: “The dose makes the poison.” Ricky only had the bait for a moment. It was unlikely he could have ingested a large quantity, no matter what the active ingredient. But cholecalciferol is the one with which the smallest amount poses the greatest danger, and there is no antidote. Consultation with ASPCA Poison Control confirmed that we should monitor Ricky’s calcium levels and kidney function for four days. If abnormalities developed, he should be hospitalized and treated symptomatically by specialists. We made arrangements for Ricky to have the necessary tests throughout the weekend, and my assistant got ready to head home . . . except for another urgent call about Johnny Darter, a 5-month-old mini-Bernedoodle. He, too, had been out walking with his owner two hours ago. Now he suddenly had begun shaking, his head wobbling. He was lethargic and reluctant to move. His owners were adamant he had no exposure to anything unusual. No rodenticides. No drugs, prescription or recreational. No poisons of any kind. They were very worried, and brought Johnny in to see me on emergency. The pup was alert but anxious, and having episodes of muscle twitching. He seemed slightly disoriented and uncoordinated. I had seen this before. We are rarely able to definitively confirm the cause, but I have seen it occur after ingestion of rotten food or compost … or mushrooms. I’m not a mycologist, but I do know there are ’shrooms on the Vineyard that are “tremorgenic.” In other words, when ingested they can cause the symptoms Johnny Darter was exhibiting.

We ran basic laboratory tests. Kidney and liver function, blood sugar and electrolytes, were all normal. After much conversation, Johnny’s owners confirmed there were lots of mushrooms growing around the area where they had gone walking just hours previously. It was certainly possible Johnny had eaten some. Did I mention I’m not a mycologist? But that’s OK. Toxicologists have another saying: “Treat the patient, not the mushroom.” I treated the patient, sending him home with muscle relaxants to try to control the tremors, and instructions to keep a close eye and call back if things got worse.

It took two more days before Johnny was completely back to normal. Ricky never showed any clinical signs or laboratory abnormalities consistent with rodenticide toxicity. What a relief. But the week continued with more dogs being dogs. The border collie who swallowed six used feminine hygiene products. The Labrador who ate a sock, then vomited the sock, then ate it again before the owner could retrieve it. Dogs. Being. Dogs.