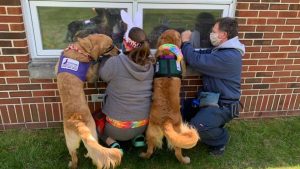 The Middletown Home Activities Staff has created ways to entertain residents while adhering to the CDC safety guidelines.

A recent surprise for residents was a special visit from Rosie and Lenny, two horses that came to The Middletown Home and went window to window to visit each resident.

Lenox, “Lenny,” is a rescue horse owned by Samantha Horn. And Rosie, once labeled an untameable mustang, is owned by Olivia Bort who adopted her through the Bureau of Land Management. Both Rosie and Lenny live at Justamere Farm in Middletown. The Middletown Home also hosted a Puppy Parade featuring three service dogs from Susquehanna Service Dogs who visited residents at their windows. Residents were visited by Safari, an eleven-month-old golden retriever; Guinness, a year and a half old black lab; and Blanche, the Middletown Home’s Facility Dog, a five-year-old golden retriever.

The Middletown Home started a Family Video Call program to help connect residents with their families. The facility says residents’ faces light up when they see their family members on the screen talking with them, sharing stories, and asking them about their day.

They have also been keeping busy with activity packets which include word searches, crossword puzzles, poems, stories, coloring pages, and much more. Pastors have also been meeting with residents daily and spending time with them, talking and reflecting on truths and encouragements found in the Bible.

“We hope that this quarantine will be over soon, but we certainly have learned a lot about the strength there is in community, the importance of connection, and the love that can overcome any distance,” says Louis Vogel, III, Chief Executive Officer at the Middletown Home.