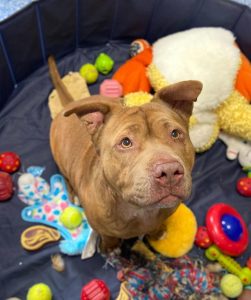 The stay at home directive by Governor Larry Hogan has been an unusual gift to the Queen Anne’s County Animal Services shelter in Queenstown. Animal Services has been asking people to consider fostering a pet while they are staying home to comply with the efforts to prevent the spread of COVID-19, and the fostering promotion has paid off big for the pets.

As of Wednesday, April 22, the shelter has fostered out 21 dogs over the past five weeks with only four dogs remaining at the shelter. Two of those are beagles that recently came into the shelter.

The third is a 6-month-old Lab mix puppy that was found as stray. Attempts have been made to find its owner, but if no one is found, the pup will be available of fostering or adoption.

The fourth dog is an older Shar-Pei mix female named Gemma. Gemma is described as “50 pounds, a big ball of wrinkles. Loves stuffed doll animals. She’s a ‘couch potato’ and adores her couch bed surrounded by her stuffed toy animals. She likes to be ‘the queen of attention.’” The only negative about Gemma, she suffers from separation anxiety, so she needs to be with someone all the times and doesn’t like other dogs. She will need to go to a home where she is the only animal.

“The foster push has definitely helped,” said Animal Services Director Ramon Villatoro. “In the time I’ve been working here, we’ve never had this low in numbers of dogs in the shelter. I want to thank everyone who has stepped forward to help with having a pet at home with them during the time period.”

Adoption and Communications Director Brittany Fox added, “Those who have fostered these dogs are improving the lives of our pets.”

As the number of dogs in the shelter has dropped, kitten season has started, and there are currently 45 cats at the shelter, the majority of those deemed “barn cats,” Fox said. “A barn cat is not a couch cat inside your home. It needs — wants — a job. A barn cat lives inside the barn, brewery, place of business, and works for its food, catching mice and other rodents. All of our cats are neutered/spayed and fully vaccinated.”

Many options for foster care are available with no obligation to adopt. There are also short-term overnight and weekend fostering arrangements. Free pet food, bedding and veterinary services for fostered pets as needed.