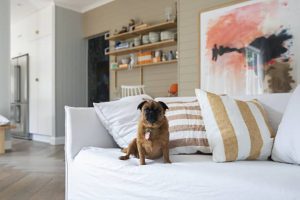 It may come as no surprise to puppy parents, but researchers have now shown that dogs can go through a moody teenage phase, too. A new study, conducted at Newcastle University in the UK, looked at the behavior of 368 dogs as they went through doggy puberty (between 5 and 8 months of age).

To test whether dogs rebel against their owners as they grow up, researchers studied the levels of obedience exhibited by trainee guide dogs. They looked at the behavior of a variety of breeds (including Labradors, Golden Retrievers, and German Shepherds) towards both their human “parents” and strangers during adolescence.Like their human teenage counterparts, the dogs in the study seemed to get noticeably more rebellious during their teenage years.

For example, the researchers noticed that dogs going through puberty took considerably longer to respond to the command “sit” between the ages of five and eight months compared to when they were younger or older. However, this disobedience happened only when the command came from their owners. When strangers asked the dogs in this age group to “sit,” the teenage dogs were no less likely to obey than at any other time in their lives.

The researchers also noticed a difference between how secure dogs were in their attachment to their owners and how difficult they were during their teenage phase.

Speaking to The Guardian in a recent podcast, lead researcher on the study Dr. Lucy Asher expanded on this point. She pointed out that “the dogs who appear to have insecure attachments with their owners, dogs you might call “clingy,” appear to have the most problems during this teenage period.” She thinks the reason for this might be similar to how insecure kids often test their parents’ love during adolescence by being bold.

So how can owners deal with their teenage dogs? According to Dr. Asher, the exact same way parents should ideally react to difficult adolescent children. She says that dog owners should recognize that it’s just a passing phase. Instead of punishing their four-legged friends, owners should show patience and reward good behavior. For teenage dogs, just like teenage kids, punishment can often backfire and make their behavior worse.

This study is important because peak doggy teenage angst ties in with the time dog owners are most likely to bring their new puppy to a shelter. But, according to the study, the effects of dog puberty are notably reduced by the time a dog gets to be one year old. So if you find yourself dealing with a moody teenage pup, hang in there—it gets better.