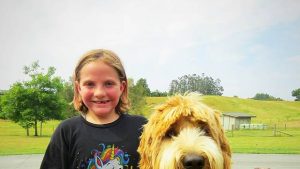 Tauranga woman Ashley Highnam has battled for eight years to get help for her young, mentally-impaired child.

After years of struggling to get a diagnosis, Highnam is now fundraising to get her daughter a therapy dog and a donation from a car maker’s foundation is putting her one step closer to that goal.

Highnam gave birth to her daughter Tara when she was a teenager.

Eighteen years old and alone, she was still learning the ropes when she noticed her 18-month-old was not the same as other kids her age.

“She was always on the go, every second of the day. Most babies her age were happy to relax, but not her,” Highnam said.

From there, things only got worse.

“We were kicked off buses almost every day as Tara would just scream and yell. I couldn’t drive then so I had to take her with me on public transport everywhere I’d go.”

Growing up with an autistic brother and a non-verbal uncle, Highnam could recognise the signs of mental impairment.

She was certain that Tara was showing signs, but autism and other mental conditions showed a bit differently in boys than girls, which left her stumped.

“The worst part was no one believed me. They’d tell me that she would grow out of it or it was my parenting that was the problem.”

She said she was recommended almost daily to take parenting courses to control her child’s behaviour.

At this time, Highnam was coming into adulthood herself.

“I was made to feel like a failure of a parent … people would tell me that I was just making excuses for her behaviour. I was just trying my best.”

Years passed and Highnam felt health professionals were flippant towards her concerns.

It was not until a series of meltdowns at school and teachers putting their worries forward that 6-year-old Tara received psychological testing.

Within 10 minutes, a psychologist came up to Highnam and said he was almost certain there would be a diagnosis. Words she had been hoping to hear for six years.

“I was finally being heard … for years people had been telling me it was my parenting or her age. Someone was finally listening to me.”

This sign-off meant Tara was able to apply for a therapy dog, something Highnam had hoped for a long time.

However, the waiting list was more than seven years long.

Now she has taken matters into her own hands and has been working to fundraise the $13,000 needed to buy her 8-year-old the much-needed pet.

Therapy dogs are trained to calm their owners and reduce anxiety through compression methods like laying on their owner’s lap and using their body weight to provide deep pressure calming.

However, they are expensive as they require months of training to learn to respond to specific triggers and conditions.

The Mazda Foundation had got behind the cause, donating $2500 to Highnam and Tara.

“It is genuinely going to change her life if we can raise the full amount.”

She said they own hardly any glass items as Tara would often smash or break them in her meltdowns.

Plates had to be plastic and picture frames had to have the glass taken out of them.

“We only just got a new TV after she smashed one three years ago.”

Highnam was making and selling kawakawa balm as a way of fundraising, as well as planning small events.

They had also raised about $300 on their Givealittle page already.

Highnam said a therapy dog would make all the difference in distracting and calming Tara when her conditions overwhelmed her.