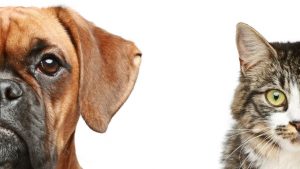 From locking dogs in overheating cars, to trapping pups in unoccupied homes, to leaving dogs chained in flooded waters during a tropical storm… it seems the stories are endless and while the perpetrators are not representative of the majority of the population, many local residents have indicated that they are fed up with the plethora of first hand witness accounts of animal abuse and neglect and the many examples of animal cruelty in Cayman that are being circulated on social media.

Many social media users have seen the Facebook image of a dog tied up behind the Palm Suites Apartments on Whitman Seymour Drive during Tropical Storm Eta. The images that were shared reveal an animal with its legs submerged in dirty water, unable to move, due to being tightly chained and exposed to harsh rains and tropical storm force winds. The owner was reported and the Royal Cayman Islands Police Service confirmed that they attended the premises but the dog was no longer there.

Several weeks ago, Loop Cayman was at the scene of a locked car full of pups that were left behind on a crowded beach in West Bay, in the midst of extreme temperatures with no water. Witnesses at the scene waited for more than an hour before the Royal Cayman Islands Police Service were able to locate the owner as she socialized on the beach. Onlookers were advised by the RCIPS that they would not be able to break into the vehicle to save the animals. When the owner was finally found, she was provided with literature on animal abuse and neglect and was warned for prosecution. She was allowed to leave the location with her dogs in tow.

As evidenced by the warning for prosecution, these acts of abuse and neglect are by no means legal in Cayman.

The Department of Agriculture website indicates that a failure to provide adequate food, water or shelter to an animal under one’s care, or exposing an animal to extreme heat or inclement weather, locking an animal(s) in a hot car, placing an animal in an area with feces, garbage or other objects that can harm them or being kept in an environment that is not suited to an animals needs, where they are unable to stand, turn around or make normal movements are all forms of animal abuse and neglect, as are acts of intentionally and recklessly leaving an animal at a location without providing minimal care or making reasonable arrangements for their care. The question is of course, whether these violations of the law are met with adequate and uniform punishment– there are a variety of opinions that have been offered.