Dozer the therapy dog will be remembered 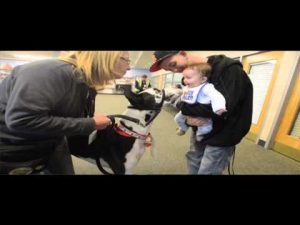 Dozer the therapy dog died on Friday, Dec. 6. Dozer spent nine years of his life serving with his owner, Angie Nousiainen, as an Alliance of Therapy Dog team. “I’m devasted,” Nousiainen said in an emailed statement. “Dozer was so much more than just a dog. He was friend, a comforter, and a family member. We trained together, volunteered together and attempted to change the world together.”

Dozer retired as a therapy dog in August. According to Nousiainen, he spent the time between retirement and his death “holding down the couch and keeping his canine nephew in line.”

Nousiainen said his death was peaceful, but gut-wrenching and came as a result of old age.

“He had all the best products designed to keep his muscles and joints healthy and ate the best foods and got the right amount of exercise,” Nousiainen said. “All these things bought us more time but couldn’t stop the clock. Soon his appetite deteriorated and his zest for adventure disappeared.”

As he died, Nousiainen surrounded him with roses because he loved to smell them. She laid with him, held his paw and kissed him goodbye. He was buried next to his sister on a bed of roses.

Nousiainen said she couldn’t pick a favorite memory from her time with Dozer, but the thing she’ll miss the most is his snuggles.

“There were times our visits were heartbreaking and many times I put on a brave front during a visit then cried all the way home,” Nousiainen said. “He’d snuggle up and rest his head on my shoulder, letting me know he was there for me.”

For those who never had the opportunity to meet Dozer, Nousiainen described him in one word: love.

“He loved old people, young people, good people, he loved the ones who were often unlovable,” Nousiainen said. “Dozer had a remarkable way to not only show love but to make you feel truly loved. He knew who needed him and singled them out. He made you feel important.”