Ellory Gets A Service Dog 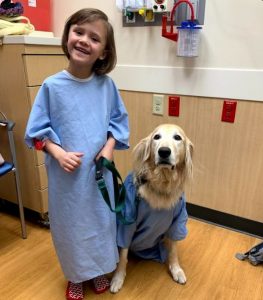 After a Blue Ash girl received a complex diagnosis, her parents have been on a mission to get her a service dog because they believe it would change her life dramatically.

Ellory McClure’s health journey started in late 2017 when her parents, Brian and Carolynn, say a tonsillectomy led to a change in her behavior. The typically friendly and smiling child started to act differently.

“We had full-on rages,” Carolynn said. “So a child who goes from just loves everybody [is now trying] to trying to strangle you, punch you, just attack you.”

Dozens of doctors appointments later, the McClures say they got a diagnosis. They were told Ellory has PANS.

According to Stanford Medicine, children with PANS often have obsessions, compulsions, depression and anxiety. Ellory, only 6, has experienced some of those symptoms.

“Really devastating just to watch her emotional state where she was this happy full of life kid to where we’ve literally heard suicidal comments,” Carolynn said. Ellory has trouble speaking and eating, and Carolynn says her immune system is compromised.

“Anything that can trigger her body to have an immune reaction, her body is basically attacking itself and specifically her brain,” Carolynn said.

Ellory also has motor and oral tics and was diagnosed with PTSD, or post-traumatic stress disorder. Her parents say she is currently on a long-term antibiotic.

“I just want to be healthy, not going into surgeries or anything like that,” Ellory said.

Horseback riding has been therapeutic for Ellory, and she says her family, friends and faith help her through, but her parents believe she needs more help.

That is why they are now working to raise money for a service dog that would be extensively trained to help Ellory with anxiety attacks, speech and medical episodes.

“It will go with me places like the dentist or doctor’s office,” Ellory said.

Carolynn and Brian believe a canine companion would boost Ellory’s confidence as well since her disorder is not always easy for others to understand.

They plan to continue sharing their daughter’s story in hopes it will lead to more compassion and understanding for children like Ellory.

“Give them grace and just not judge them because there’s a lot going on behind the scenes,” Carolynn said.

Carolynn and Brian said they are working to get Ellory started on an IV therapy treatment, but right now it is not covered by insurance.

So far, more than $16,000 has already been raised through a Go Fund Me created to help cover the cost of the service dog, the potential IV treatment and other medical expenses. Ellory’s parents said they are thankful for the support.