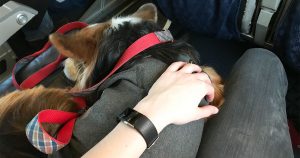 I would like to start this article by admitting that I am an anxiety sufferer, and flying stresses me out. I get pretty anxious before the flight, and after the flight. And well … the time in the sky isn’t good for me either. I often say, “I love to travel, but I hate traveling.” So I understand people’s need to find any comfort from my anxiety, even if that takes the form of an emotional support animal.

Personally, I have a dog and a cat, and both tend to give me more stress than comfort. But obviously that is not the case for everyone, which brings me to the real meat of this piece: The federal government is enacting a new rule restricting the types of service animals allowed on commercial airline flights.

The issue here is that airlines feel that some people, maybe even a lot of people, are taking advantage of the pretty-loose laws about emotional support animals as a way to get around paying additional fees to travel with their pets. And when I say “pets,” it’s important to point out that we are getting into some exotic animals. Back in 2018, a woman was barred from bringing an “emotional support” peacock on board a United Airlines flight. This situation actually made international news, and according to the BBC the only reason she was prevented from bringing the bird on the plane was because “it did not meet guidelines due to its weight and size.” However, according to NPR, in 2016 a “comfort turkey” was actually allowed to fly on Delta Airlines.

If I sat next to someone holding an emotional support turkey, I would have to assume the person holding the turkey would have less anxiety. I, however, would feel much much more anxiety, particularly considering I live in a small rural Oregon town that is known for having wild turkeys that wander the streets, and have a nasty habit of chasing kids and pecking at their shins. But here is another issue with exotic emotional support animals on planes. Many of them are untrained, and can become obnoxious, or even dangerous, to other passengers and crew members. Paul Hartshorn, Jr., a flight attendant for American Airlines and spokesperson for the flight attendants’ union there told NPR that, “For years, our members have been dealing with untrained, sometimes wild animals in the aircraft cabin … we’ve seen everything from pigs, to monkeys, to hamsters. You name it, we’ve seen it. This has made many passengers incredibly uncomfortable. It’s the incessant barking, defecation in the cabin which happens more times than I care to tell you.” Hartshorn also mentioned in his interview that the menagerie of “comfort” animals packed with passengers inside a cramped metal tube can make a flight miserable for allergy sufferers, and he says some flight crew members and passengers have even been bitten by these untrained animals. The real issue here seems to be around a very loosely written law.  Originally, it allowed people with disabilities to have service animals free of charge, including emotional support and comfort animals. However, there really isn’t a definition or any requirements listing what, specifically, qualifies as an emotional support animal. Thus, the situations listed above. The new law going into effect in January 2021 will limit emotional support animals to “a dog, regardless of breed or type, that is individually trained to do work or perform tasks for the benefit of a qualified individual with a disability, including a physical, sensory, psychiatric, intellectual, or other mental disability.” The passenger will also need to provide the airline with documentation on the persons disability, and certification that the dog has been trained. The problem with this change, according to disability activists, is that it’s too restrictive. According to Curt Decker, executive director of the National Disability Rights Network, there are other animals — including cats, rabbits and even miniature horses — that may not have service animal training or perform specific tasks, “but may in fact lower the anxiety level of someone with an intellectual disability, autism or other kind of mental health issue where flying is very stressful and would be calmed by having a legitimate emotional support animal with them.”

I actually agree with him; limiting emotional support animals to only dogs really does seem too strict. And as so many situations like this often do, it’s coming down to money. If an anxiety sufferer wants to bring an emotional support animal on the plane with them, but that animal is not a specially trained dog, they will need to pay a pet fee that can run as high as $175.

My prediction here is that airlines will find a middle ground, so that those who legitimately need a comfort animal will be able to have one on a flight, while weeding out the people who just don’t want to pay a fee for flying with their turkey. But until then, be advised, the days of loose flight restrictions on emotional support animals are coming to an end. So if you’ve got upcoming travel plans with your emotional support emu, it’s best to just stay grounded.