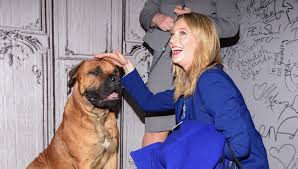 Into the Dark is Hulu’s horror anthology series where every film-length episode is centered around a different holiday. There’s “Pooka!” for Christmas (and the sequel, “Pooka Lives,” for Easter), “Pilgrim” for Thanksgiving, and “Culture Shock” for Independence Day. Of course, there are only so many real holidays on the calendar, so Into the Dark has already based episodes around April Fools’ Day, the first day of school, and coming this June, my favorite week-long holiday, Pet Appreciation Week.

Variety reports that Judy Greer, Steve Guttenberg, and Ellen Wong are set to star in Into the Dark: Good Boy, or as it shall henceforth be known, The Murder Dog Episode. The film centers on Maggie (Greer), a woman who gets an emotional support dog to help quell some of her anxiety. Only, she finds him to be even more effective than she could have imagined because, unbeknownst to her, he kills anyone who adds stress to her life… Guttenberg [plays] Don, Maggie’s “misanthropic but at times soft around the edges” boss, while Wong is Annie, a former baby-sitting charge of Maggie’s who recently moved to Los Angeles and rekindles their friendship. The role of the emotional support dog will be played by Chico the Dog, who looks like the dog from Dog With a Blog, the greatest TV show of all-time. If Chico doesn’t talk (“My name’s Chico and you’re not the man,” he says, while crunching into someone’s nuts), I am going to write a strongly worded letter to Hulu. Directed by Tyler MacIntyre and written by Aaron and Will Eisenberg, Into the Dark: Good Boy premieres on June 12.