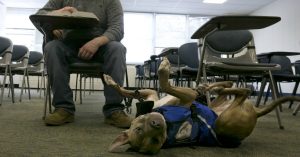 In a rule change that could impact select veterans, the U.S. Department of Transportation announced that dogs — and no other species — will soon be the only service animals allowed on board U.S. flights.

The updated policy eliminates the option of flying with animals previously categorized as emotional support. That means no horses, peacocks, rabbits, snakes or quokkas, no matter how much emotional support their gigantic, cartoonish smiles provide.

The previous policy, one that the Transportation Department said “eroded the public trust in legitimate service animals,” permitted emotional support animals to travel free of charge under guidelines that irked many in the industry who felt passengers were merely scamming airlines out of pet-associated costs.

Additionally, passengers and flight crews alike were seldom fond of sporadic biting or bladder and bowel evacuation by animals that seem more suited for the Serengeti or Amazon rainforest.

“The days of Noah’s Ark in the air are hopefully coming to an end,” Sara Nelson, president of the Association of Flight Attendants, told USA Today.

The refined guidelines, which now define a service animal as “a dog that is individually trained to do work or perform tasks for the benefit of a person with a disability,” received support from more than 80 veterans groups that have, over time, argued that the transport of untrained animals jeopardizes the ability to bring a service dog by those who actually need it. “This is a wonderful step in the right direction for people like myself who are dependent on and reliant on legitimate service animals,” said Albert Rizzi, founder of the advocacy group My Blind Spot. Rizzi added that too many people “want to have the benefits of having a disability without actually losing the use of their limbs or senses just so they can take their pet with them.”

For now, disappointed pet-free passengers will be forced to take extraordinary measures to attain emotional support, such as employing the company of another human being, reading a book, or enjoying the soothing cracks of an airline bottle of vodka’s twist off cap.