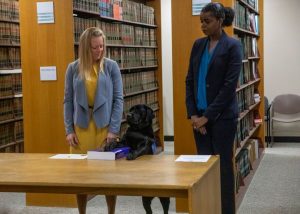 Hatty, age 2, will work with children as well as people with mental health issues who have been the victims of assault.

It was a real dog of a ceremony this week during a swearing-in at the state’s attorney’s office in Chicago.

The newly sworn-in worker is a Labrador retriever named Hatty. The 2-year-old will be on a 9-to-5 human schedule. But she’s being asked to work like a dog, to just do what comes naturally to most dogs: show affection.

Her job is to ease the strain of criminal proceedings on young children and those with mental-health issues who have been victims of assault. She’ll handle up to 200 cases annually.

Hatty is the office’s first emotional-support dog and was trained partly by inmates.

Cook County State’s Attorney Kim Foxx presided over Tuesday’s swearing-in. Hatty stood on her hind legs over a table and placed her paw across a law book as an oath was administered.