Enjoy A Group Of Dogs 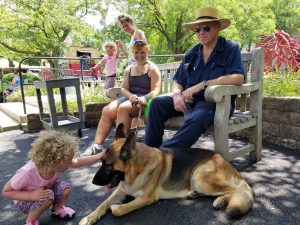 While golden retrievers Bentley, Riley, Tucker and Sugars splashed in the Wyomissing Creek, their owners cooled down with cold beers.

The canine playmates were part of a friendly group of seven dogs and eight people to enjoy Dogs & Brews at the Reading Public Museum.

“Usually, we do some kind of yearly project with the ARL,” Lindsay Crist, museum director of community development, said. “It’s a good relationship.”

Crist said the annual beer tasting event typically draws 500 to 600 people and their pets, but the number of tickets sold this year was limited to 200 due to the coronavirus pandemic.

“This year is definitely a lot smaller,” she said.

Other adjustments included social distancing and mask-wearing while walking on the museum grounds.

Tickets for designated drivers were available at a reduced price and included unlimited non-alcoholic beverages.

Sharliene Bowers and her husband, Tom Rhoads, of Ruscombmanor Township relaxed on a bench outside with their dog, Jaeger, at their feet.

Bowers said she had sampled several beers and planned to try a few more. Rhoads, as designated driver, stuck to soft drinks, while Jaeger quenched his thirst at the canine water stations.

The children were with their mother, Jessica Schmidt, whose husband, Lucan, is cofounder with Josh Taylor of the Schaylor Brewing Company, Cumru Township, one of 12 microbreweries represented at the event.

Though attendance was limited, Crist said, the number of breweries was about average.

Several yards from the event midway, the retrievers and their owners grouped under popup tents near the creek bank.

The friends, who live throughout the Mid-Atlantic region, met three years ago at a Golden Jubilee at Dewey Beach, Dela., and bonded over their mutual interest in retrievers, said Bonnie Thomas of Allentown, who with her husband, Allan, owns Bentley and Tucker.

This was the second year they attended Dogs & Brews as a group.

“We have a lot of fun together,” Allan Thomas said.