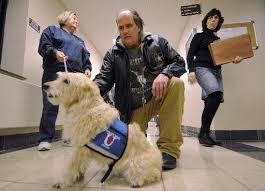 Jurors can donate their daily pay to local charities.

A lot has changed at the Erie County Courthouse in just a few days.

As of Monday morning, all jury trials are suspended for a month to prevent the spread of COVID-19, the new coronavirus strain causing widespread shutdowns of businesses and schools.

But let’s take a moment to reflect on some good news. In January and February, before jury trials were suspended, jurors donated more than $6,500 to local charities as part of a new program introduced at the start of the year.

Under a streamlined new jury system, jurors are paid for their service using a prepaid debit card rather than a check. Jurors typically receive $9 per day for hearing a case.

Jurors can now choose to donate their pay to one of three local charities: Therapy Dogs United, a northwestern-Pennsylvania-based nonprofit that connects therapy dogs with those who need them; the Erie Community Foundation; or the United Way.

As of earlier this month, Erie County jurors donated $1,421 to the United Way, $1,288 to the Erie Community Foundation and a whopping $3,812 to Therapy Dogs United, according to numbers provided by Court Administrator Bob Catalde.

Therapy dogs provide an array of services at the courthouse. In 2016, I wrote about how they help out at Veterans Court, a diversionary program aimed at helping veterans avoid prison for certain crimes and get help addressing underlying issues, such as mental health problems or addiction.

Even in the best of times, a trip to the courthouse can be a stressful experience for members of the public. Petting a therapy dog can go a long way to ease that stress.

The new donation program allows jurors to give back to the same program that brings therapy dogs into the courthouse.

All that’s on hold for now while jury trials are suspended. But in these tough times, a little good news can’t hurt.