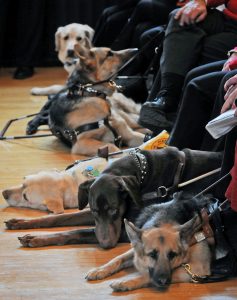 A service-dog group and the MSPCA both support new federal rules allowing airlines to bar people from bringing emotional-support animals with them in the passenger section on flights, but People for the Ethical Treatment of Animals says forcing animals to travel in the cargo hold is inhumane — and sometimes fatal.

On Thursday, the U.S. Department of Transportation announced that airline carriers “are not required to recognize emotional support animals as service animals and may treat them as pets.”

“Although many pet owners believe there’s no harm in passing off a pet as a service dog, untrained and uncomfortable emotional support animals … can not only be dangerous for the true working service dogs but also for other passengers, gate attendants, flight crew and TSA (Transportation Security Administration) personnel,” the group said in an email. “The experience can also be cruel to the pets themselves because when an improperly trained or untrained pet is placed in a situation it isn’t prepared for, it can become nervous, afraid and unpredictable.”

Unlike emotional support animals, service dogs fall under the Americans with Disabilities Act (ADA), so businesses and organizations that serve the public are required to allow service animals to accompany people with disabilities. However, with no national Service Dog licensing or credentialing system in place, NEADS said, “there’s plenty of opportunity for abuse. The new DOT rule is only a first step.”

But PETA President Ingrid Newkirk said forcing animals to travel in the cargo hold is inhumane.

“No animal should be forced to travel in the cargo hold, with its confusion, noise, extreme temperatures and sometimes improper pressurization,” Newkirk said. “Animals have died during delays, temperature control failures and have been lost or have died during the journey due to luggage falling on their crates. It’s as simple as that.”

More than 500,000 pets flew safely as cargo on U.S. flights in 2017, the most recent year for which statistics were available Saturday, but 24 died in the air, according to government data.

But Kara Holmquist, director of advocacy at the MSPCA-Angell in Boston, said: “We’re pleased that the DOT rule prevents airlines from discriminating against service dogs based on their perceived breed, and prohibits wild animals on board, which we believe can be dangerous for people and animals.”

“For people planning travel with their emotional support animal — and who are concerned that their pet will now travel in the cargo hold — we urge them to speak with their veterinarian, and research airline safety protocols before traveling,” Holmquist said.