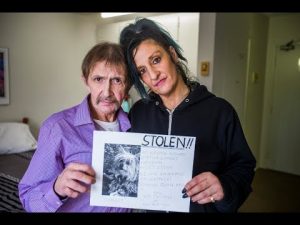 A cat nap turned into a dognapping for a distraught Toronto woman.

Venessa Shibley, 46, is desperate for the return of her beloved three-year-old Yorkshire terrier, Charlie, after, she says, her pet was stolen from Kipling subway station on Oct. 27.

“He means the world to me,” said Shibley, her voice trembling.

“I got my dog so he would be with me for emotional support so he could be with me all the time. I’m just a mess. I miss the little guy. I just love him so much.”

Shibley, who has sleep apnea, says she was visiting a friend with her trusty “emotional support” pooch when she felt like she was going to doze off.

She says she went to take a quick snooze in a washroom stall at the subway station while holding onto Charlie’s leash. When she woke up, the dog was gone.

“This is the first time I ever went out by myself (because) sometimes I fall asleep in the weirdest places,” said Shibley, who lives in temporary housing at a downtown Toronto hotel with her husband, Mark Auger, 59, a retired City Hall janitor.

Earlier, she said she had been talking with the woman in the stall next to hers as Charlie kept going over to say hi and so she tightened up the leash.

“I said, ‘I’m so sorry,” said Shibley. “And she said, ‘Oh, It’s OK. I love dogs’ I fell asleep for one minute and when I opened my eyes, the leash was hanging there with no dog.”