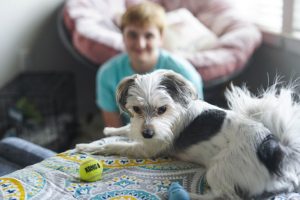 Owning pets while in college differs for everyone. While on-campus residence halls only allow certified emotional support animals, most apartment complexes and housing near campus allow any type of pet if the resident pays a certain fee.

Since pets aren’t allowed in residence halls, students can apply to have an Emotional Support Animal with them through the Office of Access and Learning Accommodation.

Anna Shaw, assistant director of OALA, said within the last few years, there has been an increase in requests for ESAs across U.S. universities.

“Currently, I think there are five animals in the dorms,” Shaw said.

Shaw said while service animals work for people who have a disability and are allowed to go with them anywhere, Emotional Support Animals are only allowed in residential housing.

“After they have been approved by our office, the approval goes to Tiffany Lowe, who is the director of Living and Learning, and she has to sign off on it as well,” Shaw said. “The students will need to provide appropriate medical documentation.”

The documentation must show the history of the pet working with the student and prove because of their psychological diagnosis, an ESA is something that the doctor recommends.

Dae Vasek, director of OALA, said after contacting the office of Living and Learning, the residence hall must contact the roommates of the individual requesting the ESA as well as contact the other residents in the hall.

“We have run into a situation where a student is allergic to cats and can’t be on the same hall as someone with a cat,” Vasek said. “Or they have a fear of animals, a fear of dogs.”

They then have to decide if they need to move anyone. Vet paperwork, shot records and proof of liability insurance for the pet are also required.

A weight limit of 50 pounds is also set to prevent large dogs from living in residence halls.

“There are always exceptions, but we try to stay within 50 pounds or less, as far as weight goes,” Vasek said. “That’s really for the health and safety of the animal too.”

She said because Baylor is a private university, it has its own process that may look different from public universities.

If a student brings in an unapproved animal, they may be denied future ESA requests. However, once a student finds a place to live off campus after their freshman year, pet restrictions loosen depending on what lease a student decides to take up.