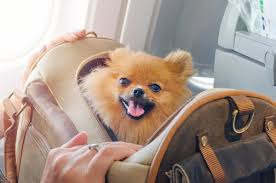 People do a lot of things to avoid airline fees. Bring the bag to the gate hoping it will be gate checked rather than pay the checked bag fee. Have friend bring you a third bag beyond the point the airline has checked that you only have two to carry on. More cynical, yet still done, is to ask for wheel chair to board early but then walk off the plane at the other end. But a subtle change in a law just closed the loophole on people who bring pets and claim that they are emotional support animals in order to save the onboard pet fee.

This is very sound policy and the days of a 300-pound pig flying in first class, or sitting next to a peacock, turkey, snake, or the more mundane untrained dog or cat are likely over.

Airline employees will tell you that people with real disabilities present few problems in the airport environment. They know how to use their equipment and/or how to work with their true service animal, often are quite independent, and ask for accommodation but not outward special treatment. Those abusing these policies are often easy to spot — their animals are often clearly pets and treated a such, are usually untrained for any service, the passenger often makes a big deal about it, and they generally stand out. Those with real disabilities and real service animals benefit greatly from this change, since it will reduce or eliminate those trying to appropriate their ADA benefit. Flight Attendants, too, undoubedtly see this as an improvement.

I have discussed with a lawyer friend the idea of claiming him as my emotional support animal, and getting a note from a friendly doctor saying that I am emotionally fragile when not traveling without my lawyer. Then, I would buy a ticket on a major US airline, claim him as my emotional support animal, and see what happens. As silly as this sounds, how different is this than traveling with a large animal that doesn’t even understand the environment? The idea would be to bring awareness of this loophole to its absurd conclusion. Thankfully, it was obvious even without this and now that this loophole is closed, expect that airlines will no longer accept the emotional support animal while staying fully compliant with the service animal regulations. I also expect that some people will now try to have their pet classified as a service animal and some unscrupulous entrepreneurs may try to find a way to support this. The loophole may be closed, but that doesn’t mean that people won’t look for a new one.