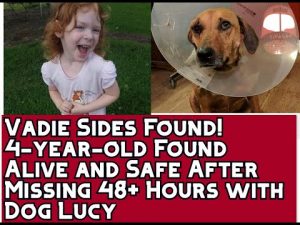 Evelyn Sides, the four-year-old who was found on Friday after going missing in an Alabama woodland for two days with her pet dog, has told her story of how she was eventually found.

According to local authorities, Evelyn “Vadie” Sides, was found safe and well when approached by a rescue team. Her pet dog, Lucy, was by her side.