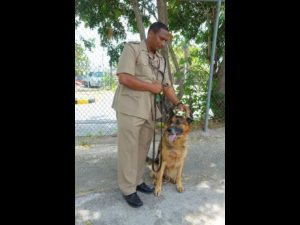 After having been on the tail of criminals for years, one of the top dogs of the Jamaica Constabulary Force (JCF) is about to press ‘paws’ on his career.

Patreek is an eight-year-old German Shepherd that responds to commands only in Russian. And he has allegiance to one person – his handler, Inspector Gregory Ottar, chief canine trainer at the JCF’s Canine Division.

The two developed an inseparable bond back in 2013 during a three-month training regimen in Russia, Patreek’s homeland. Since the top dog’s arrival in Jamaica that same year, Patreek has shown himself to have distinctive pedigree among equals.

Ottar disclosed during an interview with The Gleaner that Patreek’s response exclusively to commands in Russian was the wish of the administration at his home canine training school in Russia.

“One of the reasons is less distraction because if you are working and somebody knows the command, it can distract the dog,” he said.

The inspector said that Patreek was the only dog in the division that responded to commands in Russian. There are other dogs who are trained to respond to Dutch or English.

Trained to detect explosives, Patreek has had a decorated career and has a list of impressive achievements. His biggest wag was working as the sole detective dog during the Jamaica visit of former President of the United States Barack Obama in 2015.

“When the Americans saw how he worked, they put up their dogs and allowed Patreek to do his job. They were fond of him when they saw how intelligent he was,” said Ottar.

“He worked all over Jamaica whenever heads of government are going to meet and during sittings of Parliament.”

Patreek is so devoted to his handler that he refuses to work with any other person. If Ottar is off duty, so is Patreek.

“He won’t work for anybody else. That’s the relationship that we have,” the inspector said. Ottar revealed that whenever he goes off on vacation leave, Patreek becomes extremely stressed.

There is always much anticipation at the start of each day, but the veteran dog prizes presence and loyalty over overt acts of endearment.

“He will allow you to touch him, but he won’t show you any affection. Patreek doesn’t show his love like other dogs do,” Ottar told The Gleaner.

As service dogs in the Canine Division normally retire at age eight, Patreek’s career is coming to an end soon. If retired dogs are not adopted by their handlers, they are turned over to the Jamaica Society for the Prevention of Cruelty to Animals to be adopted.

But for Patreek, there is no doubt where he will end up.

“I’m going to take him,” exclaimed Ottar, who said that Patreek would never survive if he were to be placed with someone else.

Patreek enjoys going out for occasional drives with his handler and can be extremely protective of him. Ottar said that Patreek has proven to be more than man’s best friend.

“He would have helped me in my promotions and helped me to become a better trainer,” Ottar said.