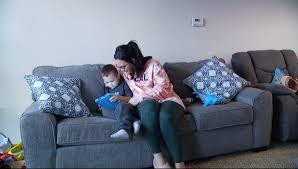 “He’s excitable, crazy, funny, loving, curious,” she said. “The list goes on and on.”

Deklan was diagnosed with autism when he was two.

“He is nonverbal he does have sensory issues,” said Brianna. “Certain noises, bright lights, food textures, clothes textures, things like that bother him.”

His family looked into getting a service dog after an incident shortly after they moved into their new house.

Brianna said this was the scariest time of her life.

“We live on a busy road that leads directly to a highway,” she said. “I grabbed my daughter, ran out the door, and tried to get to him. I saw a car pulled over on the side of the road. That was the scariest feeling for me because you’re not sure if the worst had happened.”

Brianna reached out to the nonprofit 4 Paws for Ability in Ohio, who specializes in service dogs for children with disabilities.

“There’s a huge gap in that industry of serving children,” said 4 Paws for Ability Development Director Kelly Camm. “4 Paws is very different in that we don’t require the child to actually be the primary handler, and that is often the case where a child could definitely benefit from a service dog, but may or may not be able to handle the service dog.”

Camm says their most common application is for service dogs for autism.

“The dog will actually be able to track him, and we call that search and rescue or tracking,” said Camm. “Deklan tethered to his dog in public so if he sees a balloon that he really wants, the parent will be able to tell the dog to go into a down, which will then prevent him from being able to run off and keep him safe.”

“I can’t go to the bathroom, go upstairs, do anything without hearing a car passing by and wondering, ‘did I triple check the locks’,” she said. “I know I can’t go through that again, I don’t know if Deklan would get home safe again.”

“It would be the greatest present to be able to tell him ‘this is going to happen for you’.”