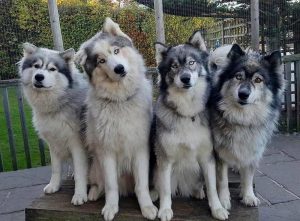 As he chats, six-year-old husky, Thunder, is laid on his owner’s chest – his favourite place to curl up.

Adrian bred, delivered and raised Thunder, and it’s clear the pair share a special connection. But Adrian, a South Yorkshire photographer, claims the most impressive thing about Thunder is his emotional sensitivity.

“He picks up on everybody’s emotions,” Paul reveals.

“He’s like the man in that film, Green Mile, who absorbs others feelings and illnesses; everybody who’s met Thunder can feel it. When you look into his eyes, it isn’t like looking at a dog at all.”

Thunder is one of a family of four husky dogs – Thunder, his two siblings, Binny and Thor, and mum Stormy. Together, the four – along with Adrian – form ‘Therapy Huskies’; a team of emotional support dogs providing care across the country for those living with anxiety, autism, illness, and bereavement.

“The dogs each have a speciality,” says Adrian, who launched Therapy Huskies three years ago, after delivering all three dogs six years ago, and falling instantly in love with them.

“Thunder, as we know, is sensitive, and he provides a vital end of life support service. He’s also a schools therapy dog, and does a lot of work with children with ADHD and autism.

“Binny is a cuddler, so she works as a bereavement dog. If someone hugs her, she’ll just hold them, however long that may be for.

“She’ll put her head on someone’s lap and stare into their eyes. She’s such a good little girl, very special.

“Thor looks after people with autism, and those who can’t communicate.

“He has beautiful blue eyes, and looks like a polar bear, and he’ll wink and slow blink at people and they often communicate with him.

“Finally we have Stormy, who is the other three’s mum. She’s beautiful to look at, with one brown eye and one blue eye.

“A lot of her work is with children living with cancer, and she does all kinds of little tricks – she’ll speak, give high-fives, put her paws on her head, spin around, that sort of thing.

“They all work in dementia hospitals, care homes, and schools. They’re a really special team.”

Adrian says the hardest job he has to do, and the one he refuses to charge anything for, is his end-of-life visits with Thunder.

“It’s incredible, and a real privilege, to be asked to share someone’s final moments, and Thunder brings such a sense of peace and calm,” he says.

“He lays with them on the bed, holding his paw on their hands and slows his breathing down to match theirs, and then when that person passes away, he leans over and kisses them, just once.

“Everything he does is instinct. Afterwards he’s always quiet, and takes a couple of hours in a corner of the house on his own, before coming to sit on my knee. It’s as if he grieves every passing.

“Those are hard days, heartbreaking, but it means such a lot to be able to offer something, anything, in those moments, to a family that needs it.”

But like many businesses across the region, Therapy Huskies has been hit hard by the current pandemic, and its effect on our way of life.

“We’re always incredibly busy, but business just dried up overnight, as did my photography work,” says Adrian, who lives with the dogs, and wife Clare, in Barnsley.

“It’s hard for the dogs, especially being stuck inside so much, as they usually get four or five walks a day, and we’ll often cover 12-15 miles in a day, so – though we respect the reasons for it – the single walk that is allowed is tough on them.

“Thunder especially is finding it hard; he’s a working dog and absolutely loves it, so it’s hard for him not going and seeing people; he seems a bit depressed at the moment.

“On the business side, we’ve gone from earning quite a bit to absolutely nothing.

“The important work the dogs do, which we all love so much, helps to pay for their health, their food, their life. They’re expensive animals to keep, the food bill alone is £600 per month, then there’s insurance on top of that, then health insurance, public liability, transport, it all adds up.”

But though times are hard, Adrian says the family is grateful to be healthy and to have one another, and they and the dogs have set about providing a different, more socially distanced, type of therapy to those who need it in the coming months.

“Our focus has been on the Therapy Huskies Facebook page, posting photographs, videos of the dogs, and messages and updates,” says Adrian, who is currently training to be a counsellor, and has also signed up to be a volunteer driver for the NHS throughout the coronavirus crisis.

“It’s a difficult time for everybody, and there’s a lot of anxiety flying about, so we want the dogs page to be somewhere people can come to escape, and the smile.

“They have over 7,500 followers on Facebook, so we’re filling it with as much positivity as we can, because that’s what they’re all about.

“Even though they can’t leave the house, they’re still doing their job, providing a form of therapy to people at a difficult time.

A message from the Editor:

Thank you for reading this story on our website.

While I have your attention, I also have an important request to make of you.

With the coronavirus lockdown having a major impact on many of our advertisers – and consequently the revenue we receive – we are more reliant than ever on you taking out a digital subscription.

– Subscribe to The Star website and enjoy unlimited access to local news and information online and on our app. With a digital subscription, you can read more than 5 articles, see fewer ads, enjoy faster load times, and get access to exclusive newsletters and content.

Our journalism costs money and we rely on advertising, print and digital revenues to help to support them. By supporting us, we are able to support you in providing trusted, fact-checked content for this website.