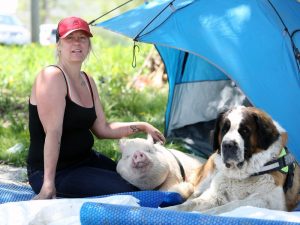 An Odessa woman and her two daughters are living in tents in the parking lot of Kingston’s Belle Park because they cannot find emergency housing that will accept their emotional support animals.

Kelly Hennessey and her two daughters, ages 12 and 13, left their home in Odessa after feeling unsafe living in the same triplex with a neighbour who was allegedly exhibiting dangerous behaviour and uttering threats against them.

They brought with them Hennessey’s pot-bellied pig and her daughter’s St. Bernard, both registered emotional support animals that the family will not leave behind.

“My daughter has PTSD and anxiety issues from a car crash,” Hennessey said. “I’ve had six hip surgeries and also have anxiety and ADHD. (The animals) are there to support us.”

On the advice of police, Hennessey was put in touch with Lennox and Addington Interval House, who told Hennessey to leave the situation and that they would find her and her daughters emergency housing in a Napanee motel.

Two weeks later, the family was evicted from the motel — Hennessey believes because of her support animals.

Frustrated by the situation, Hennessey purchased camping gear and moved herself and her children into a quarry in Napanee while they waited for emergency housing. But shortly after, they were asked to leave by local police.

From there, when none of the available community shelters would accept the animals, Hennessey was directed to join the tent camping community at Belle Park.

On Friday, the trio and their emotional support animals —a pot-bellied pig and a St. Bernard — arrived at the entrance to Belle Park, where approximately 30 homeless have been living in tents for the past several weeks.

Chrystal Wilson has been offering support to the residents of the tent community most days and raising money online for the community at her project www.kingstondelivers.com.

Wilson was at Belle Park when Hennessey arrived. She immediately took on the role of advocate for the family and started to help them navigate Kingston’s shelter system.

“I’m just a person,” she said. “I just happened to have witnessed how it went down.”

Wilson has been helping Hennessey call local shelters and see how they can get a space. Most won’t take the animals that come along with the Hennessey family, and others are saying the animals would have to be crated indoors, which they have not been trained to do.

“I’ve given up,” Hennessey admitted, in tears. “I just don’t want to fight anymore.”

While Wilson said she feels “relatively safe” at the Belle Park camping site when she’s there volunteering, she doesn’t believe it’s a place for a family to live. There’s no running water and no means for cooking food.

Hennessey said that while the Belle Park tent community has been welcoming, she feels unsafe camping in the lot off of Montreal Street. She said she has had items stolen.

“It’s kind of scary,” she said. “We’ve had our stuff stolen last night — an air bed and some cigarettes. But it’s OK. Someone needed them more than we did.”

On Sunday afternoon, when no shelters had stepped up to assist, Wilson paid for a hotel room for the family out of her own pocket.

But when Wilson went to move the family in late Sunday afternoon, the hotel she had lined up — which was pet friendly — said no to the pot-bellied pig. She later found another hotel that agreed to allow the family to stay.

Wilson has started house hunting for the family, who has ready access to enough funds to pay rent somewhere and who simply need to find a safe, temporary place to escape a violent and dangerous home.

Hennessey described Wilson as “a godsend” during a moment in her life that she had never foreseen.

“When I was asked to leave my home, I was promised housing. It was supposed to be temporary. This was not supposed to … .”

“There’s such a lack of communication with everything happening right now.”

Hennessey and her children have been prepared to camp until they find a house, if need be.

“My daughter is the victim,” she said. “She should not have to surrender her animal or leave it behind so that we can find a place to live. I’ll move to a campground. They’re family. You’re asking me to choose between my children.”