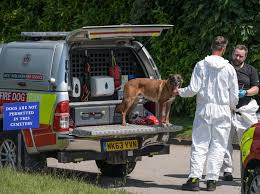 The remains of 28-year-old Phoenix Netts were found in the Forest of Dean by officers on May 12.

West Midlands Police are today continuing their search of Handsworth Cemetery in Birmingham.

Forensic specialists have been combing woodland at the cemetery and fire investigation dogs are at the scene helping with the search.

A tent has now been put up in the woods. A spokesman for West Midlands Police said: “Detectives from West Midlands Police are continuing to progress the investigation into the murder of Phoenix Netts and are carrying out searches in Camp Lane, Handsworth Wood, Birmingham as part of their enquiries.

“Forensic experts, including specialist dogs, will be carrying out examinations of the site over the next few days.”

Two people have been arrested in connection with Ms Netts’ death.

Gareeca Conita Gordon, aged 27, from Birmingham, is accused of murdering Ms Netts on a date between April 14 and May 12.

Mahesh Sorathiya, of Denmore Gardens, Wolverhampton, has been charged with assisting an offender.