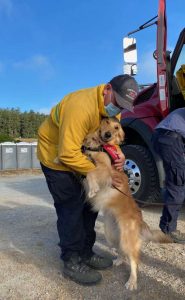 For Kerith, supporting her firefighter friends was the least she could do as they battle the Woodward Fire.

On Friday morning, Kerith traveled to West Marin to join dozens of Marin County firefighters at the staging area for the Woodward Fire. She was greeted with hugs and smiles as she made the rounds to all the different fire trucks and firefighters getting their daily instructions on how to battle the 2,400-acre blaze that is burning in the southern end of Point Reyes National Seashore.

She also received a lot of petting from all her friends, since Kerith is not only a lovable Golden Retriever, but a licensed pet therapy dog.

“She doesn’t know there is a fire. She doesn’t know there is COVID. So she just knew she was seeing her friends and was really happy to do so. For the firefighters, I think it really made their day,” said Kerith’s owner, Heidi Carmen. “One firefighter from central Marin said, ‘This was the best base camp ever because Kerith was there.'”Kerith has been a licensed therapy dog for just over a year. Before the COVID-19 coronavirus pandemic, she was a frequent visitor to all of the Marin County firehouses, always providing her unconditional love to firefighters to help with their mental health, particularly after a tough call. “There are so many bad calls that firefighters go on that she’s there to help with the aftermath,” said Carman. “Because dogs don’t judge.” Carman raised Kerith since she was 8 weeks old as a guide-dog candidate for the School of the Blind in San Rafael. However, after 14 months, it was decided that she wasn’t right for the program.

“She’s too friendly to everybody, so that wouldn’t be good for guide-dog work,” explained Carmen. “A guide dog needs to be really devoted to one person and not be distracted. For Kerith, she just wants to love everybody.”

So instead, Carmen adopted Kerith and enrolled her in Pet Partners, a national therapy dog association.

After graduating, Kerith started volunteering at Marin General Hospital in the emergency room. She quickly became a favorite of all the firefighter medics. They requested her to start making visits to county firehouses, and she was enjoying making new firefighters friends across Marin before the pandemic struck.When the shelter-in-place orders closed firehouse to the public, Kerith had a hard time dealing with the separation from her friends.

“In the beginning of COVID, when we couldn’t do anything or see anybody, I would say she was depressed. She was just down,” Carmen explained. “She missed doing what she’s really meant to do, just give love to firefighters. ”

To pass the time and stay healthy, Kerith still went on trail runs and to the beach with Carmen.

Finally, after a few difficult months, she received permission to start seeing some of her Marin County firefighter friends outdoors while they were socially distanced and wearing masks.

With the wildfires starting, Kerith received permission from the Marin County battalion chief to come out to the Woodward staging area at the Bear Valley Visitors Center on Friday morning. For about an hour, Kerith walked around the fire engines in that parking lot, greeting firefighters in between daily briefings.

About 9.m., the firefighters headed out to their assigned locations to fight the fire. The Woodard Fire is difficult to fight because it’s in remote areas of the national seashore, requiring those combating the blaze to hike in and back out. Carmen gave all the firefighters a trading card of Kerith so they could keep her close while on duty.

Kerith is also on call for Cal Fire firefighters to go to base camps, but they are still not allowing pet therapy dogs due to the coronavirus.

But with permission, she will be out there again on Saturday morning to provide a few moments of levity and joy while supporting her friends.

She wouldn’t want it any other way.