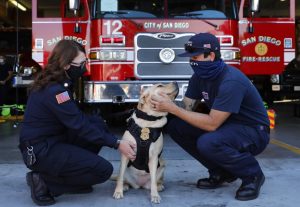 Battalion Chief David Picone remembers the car wreck on Mother’s Day some 20 years ago like it was yesterday. Picone, then a paramedic in Riverside County, comforted an uninjured toddler who was in one of the cars involved in the crash, holding the girl in his arms as he looked for her mother.

The mom was dead.

Years later, the crash remains in Picone’s memory the same way other traumatic events haunt his colleagues. Along with the “day-in-and-day-out grind,” the battalion chief said, it all takes its toll.

“It’s another resource that we can offer to our folks to cope with what they see day in and day out,” San Diego Fire-Rescue Chief Colin Stowell said.

Picone, who heads the fire department’s Health and Safety Office, called the pairing “a natural fit,” given that chaplains — the department has 17 — visit fire stations and attend debriefings in the aftermath of critical incidents, which can be traumatic.

Bodie, Ty and Genoa, who live with the chaplains, are specially trained to the standard of service dogs, although they aren’t considered service animals because their handlers, the chaplains, are not disabled. They are what is known as facility dogs, and are certified as crisis response canines.

The canine teams completed more than 120 hours of training and will be retested every three months in their first year, then annually after that.

The teams build upon other wellness efforts, including a peer support program and counseling services — initiatives that the fire department has expanded in recent years.

“There’s not one size that fits all when it comes to the mental health of our firefighters,” Stowell said. He said critical incidents in a firefighter’s career can “trigger an acute response — or over the years, it builds up.”

Picone said the COVID-19 pandemic has been an added stressor. First, there’s the concern of bringing the virus home. Then, with fire stations closed to the community, including families, there’s the isolation.

The stresses of the job have consequences. Studies have shown that occurrences of post-traumatic stress disorder, binge drinking and depression are higher among firefighters than the general population.

Stowell said suicide rates among firefighters have been on the rise across the nation for the past nine years. That hit close to home last month when a Rancho Santa Fe Protection District captain who had worked in the fire service for 31 years took his own life after what the agency said was a years-long battle with work-related PTSD.

“As fire chiefs we want to do whatever we can to never have our members experience that loss that Rancho Santa Fe felt,” said Stowell, who spoke at the captain’s memorial service earlier this month.

“For our firefighters, lifeguards, dispatchers, reaching out is sometimes difficult, as it is for the rest of society, but much more for us first responders,” Picone said. “We typically are the helpers, not the ones who need help.”

He and Stowell hope something as simple as a chaplain and a dog brings some comfort and will cause people to open up — “anything that can provide the comfort to allow somebody to lose their inhibition, or lose the anxiety, or relax enough, to forget that you are (wearing a) superhero shield,” Picone said.

Chaplain Betsy Salzman said her four-legged partner, Genoa, has been a welcome addition to the fire department.

“We have not met a firefighter who has not gotten down (to pet her),” Salzman said.

Recently, Salzman and the Labrador retriever stood with firefighters as they waited in line to get tested for COVID-19. “I don’t know what’s more stressful for us these days,” Salzman said.

Picone said he envisions the program expanding if other chaplains are able to take dogs into their homes.