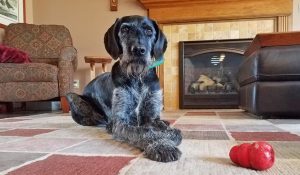 All dogs are therapy dogs. The majority of them are just freelancing.

The above meme rang loud two weeks ago and louder yet over the last few days.

“Is there anything better for stress relief than having a dog around?” asks Susan Ward, certified professional dog trainer and owner of Eden Prairie-based Pup Dogs Training (pupdogs.com).

Don’t you just love working at home while your quiet dog sits by your side?

There have been questions:

How can I take a conference call with the dog barking?

Why does Fido go crazy every time the UPS driver shows, or the door bell rings?

When talk turns to what makes a well-balanced dog, Ward puts socialization at the top of her list.

Reliable recalls, an ability to go to a place and relax and crate training are next in line.

All four of these things whistled loud two weeks ago, louder yet over the last few days.

“I’m sure you’ve seen dog-reactive dogs while you’re out walking your own dog?” she asked.

That ability, or inability in some cases, to go to a place and relax reared its head the moment we started working at home.

Who doesn’t want a dog that comes when called?

If your dog typically stays in a crate or quiet place when you’re at work, Ward suggests they do the same while you’re working at home.

“They don’t have to be crated the entire time you’re at home,” she said, “but they some need quiet time too.”

If you’re worried about barking spells while you’re working from home, Ward said to start the day with physical exercise.

“Take your dog for a walk in the morning,” she said. “Make sure they’ve had their morning meals.

“Food and chew toys make for good pacifiers,” she added.

Note: A peanut butter-filled Kong is an example of both.

“If your dog has that pavlovian response of barking every time it sees the UPS or FedEX truck, pull the shades and don’t let him look out the window,” said Ward. “If doorbells are an issue, put a note by the door alerting people not to ring the doorbell during the day.

“While they’re not long-term answers,” she admitted, “they don’t require training.”

A month ago, Ward was conducting in-person group-training and one-on-one consultations.

This week, she plans to move toward a full-slate virtual platform.

While today’s stay-at-home new normal necessitated such a move, it’s not all bad.

“There are things you can do virtually that you can’t do in class,” said Ward. “If it’s a video, the whole family can watch and they can watch at any time.”

“Where are they getting their new puppy consults?” she asked. “Who is telling them about potty training?

“More importantly,” she added, “social behaviors start forming at an early age. The biggest issues are fear and anxiety. These are important times, times you can’t turn back the clock on.”

“Yes, you can change behaviors,” said Ward, “but the longer a dog has had it, the longer it takes.”