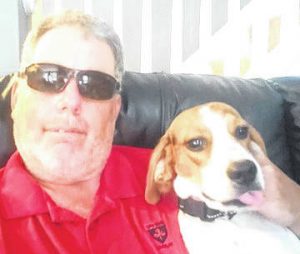 A drive-thru style spaghetti dinner is planned as a fundraiser to benefit both the Central Ohio Canine Foundation and Kevin Farrell and training for his aspiring service dog, Duncan.

“I’m a trainer with Black Paw Canine and Ben Brockway told me, ‘Hey, this guy needs some help for training for a service dog,’ so we got involved.”

The meal will be 5-7 p.m. on Saturday, Oct. 24 at the Mount Gilead Fire Department. It includes spaghetti with meat or no meat, bread and a cookie. Suggested donation is $15.

“We’re hoping for a good turnout. It will be after the Buckeyes game; people can drive up and get a meal,” he said.

Cronenwett went to a golf outing recently with Kevin and Duncan.

“He invited us to come down. We had a hole set up and sold shirts. We had the dog with us. I wanted to see how he interacted, his traits as a service dog. He did a great job at nine months old.”

Farrell is a disabled U.S. Army veteran who resides in the suburban Columbus area.

His military story began in 1982 and he was stationed in Germany for a while before being discharged. He later moved to Ohio for work.

“I began to encounter balance and hearing problems, but blamed it on old age. Then I fell down some stairs at work,” he recalled.

A friend convinced him to go to the VA hospital in March of 2015. The news wasn’t good: He had a peach-sized brain tumor that was probably growing for the past six to 10 years.

What followed were three surgeries at The Ohio State University Medical Center and a battle with meningitis.

“With the removal of the tumor, I have lost my hearing and balance on my right side,” Farrell said.

He continues to struggle with headaches and seizures.

Last April, Duncan joined the Farrell family. They sought training for the beagle as a service dog through Black Paw Canine.

“He’s learning how to heel, walk and go places with me,” Farrell said. “Most importantly, Duncan is learning to sense my migraines from my tumor and episodes of PTSD.”

When that happens, he lies down and Duncan lies down next to him, providing comfort until they pass.

“By Duncan being with me, I have noticed a drop in the length of my headaches,” he said.

Farrell said he is thankful for the help provided by Black Paw Canine and Team RWB Columbus.

“I am looking forward for Duncan to become a service dog.” he said.

Cronenwett thinks the beagle and veteran make a good match.

“Duncan is going to be a great fit. People who know Kevin said it’s made such a big difference in Kevin’s life. We are already seeing results. That’s not uncommon with dogs and vets. These dogs can make a difference in day-to-day living for them,” he said.

“They recognize things that trigger emotions in our vets. They learn their emotions. Kevin has come a long way and Duncan will make a big difference in his life.”